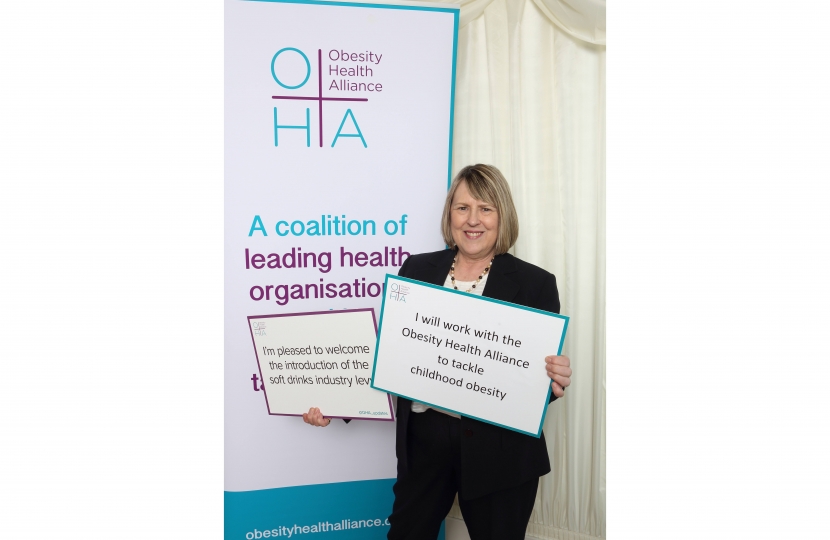 Fiona was one of a number of MPs who introduced a ten minute bill in Parliament and, as part of a cross-party group of MPs, wrote recently to the Prime Minister to voice her support for the Government to take action to strengthen the UK’s food labelling system. This would support efforts to address obesity and help people to manage their diabetes.

Obesity is a significant health issue for the UK with two thirds of adults now overweight obese and one third of children now overweight or obese by the time they leave primary school. This is also an inequality issue as children from deprived backgrounds are twice as likely to be obese, however obesity is still at unacceptably high levels in the least deprived areas too.

The impact of childhood obesity is particularly disturbing due to its relation to adulthood obesity – those who are obese as a child are five times as likely to obese as an adult. Obesity leads to increased risk of serious disease including type 2 diabetes. 12.3 million people are at risk of type 2 diabetes, mostly due to obesity.

With the introduction of a traffic light food labelling system it would help people to make informed decisions. The 4.6 million people with diabetes would find it easier to manage their disease, reducing the risk of developing serious complications.

The letter, signed by Fiona, called on the Government to:

With so few people (3 in 10 adults) reporting feeling well informed about nutritional information of the food buy there is strong support from the public to introduce the traffic light warning systems with 83% supporting it and 74% supporting the introduction of calories on menus at restaurants and takeaways.

In the Prime Ministers response she acknowledged the impact obesity has on the health and wellbeing of the individual, the NHS and the wider economy. She said that currently most food labelling regulation is set by the EU and after leaving we will have the opportunity to review our rules on food labelling ensure they are in the best interests of UK consumers and businesses. Changes would be made only after consultation, prioritising clear and consistent labelling. The Prime Minister also stated the Government is working on an updating the childhood obesity plan, which will be released shortly.

“We must do more to ensuring that consumers are well informed about the choices they are making and having clear understanding of the nutritional information of the food they buy is key. Without these messages we are unlikely to reverse the frightening increases in obesity we have seen, particularly with our children. I welcome the Prime Ministers response and look forward to seeing the updated plan for tackling childhood obesity.”