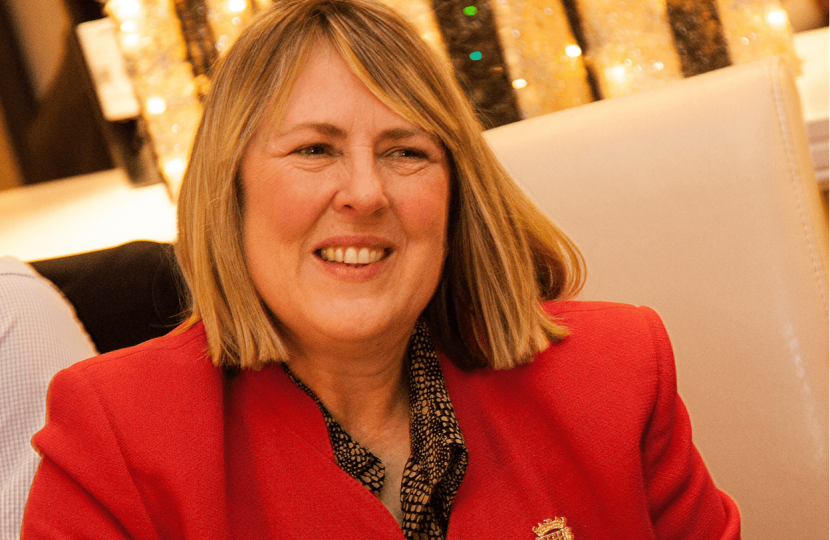 “On a scale of one to ten, how much do you enjoy your job as an MP?”

“About one hundred! For me - it's the best job in the world.”

Prior to 2010 Fiona practised as a solicitor, setting up her own business, and was national winner of the business woman of the year award “Women into Business” for the founding and successful development of her Law Firm Fiona Bruce & Co LLP, based in Cheshire.

Her first-hand experience of running and developing a local business for over 20 years  – and of experiencing the challenges and benefits this can bring, both to an individual and to a community – have inspired her support for enterprise, skills training, and productivity.

Fiona focused throughout her professional life on developing and strengthening community projects. She founded a Free Legal Advice Clinic which still runs over 25 years later, and continues to undertake prison visiting.

When she stood as Parliamentary Candidate for Warrington South in the 2005 General Election, Fiona was one of the first Parliamentary Candidates to lead Social Action Projects.  She inspired hundreds of young people – including young men from the local Young Offenders Institution – in community work such as clearing public spaces, painting park railings, relaying pathways and scrubbing graffiti – after which one young man said to her “I’ll never spray graffiti again!” Fiona co-founded a Homeless Support project and an innovative High Street Advice centre providing practical help and advice for those experiencing relationship difficulties, legal problems, debt and drug addiction.

As a Warrington Borough Councillor for 6 years – over 3 of them as an Executive Member, for Finance and Value for Money, Fiona focused on challenging and reducing debt run up by a previous Labour administration and in delivering efficiency savings of several million pounds whilst overseeing the lowest Council tax rise for over 10 years.

Fiona has a long term relationship with and commitment to developing a school in Tanzania and in inspiring young people to partner support projects in that region of Africa. Fiona has also led teams of business advisers during her summer vacations to Rwanda and Burundi over several years to help build the capacity of businesses there to trade and so create jobs and promote economic growth and development.

Fiona has focused on championing individual freedoms and human rights, both in this country and abroad. Fiona served on the International Development Select Committee for four years and chaired the Parliamentary sub-committee overseeing the Independent Commission on Aid Inspections. She sat on the Parliamentary Joint-Committee on Human Rights, which has instigated  many reports including into Freedom of Speech in Universities and the need for better care of Prisoners'  Children. She is also Chair of the Conservative Party Human Rights Commission (CPHRC), an appointment made by the then-Prime Minister. Recently Fiona launched the latest Report in her role as Chair of the CPHRC calling for the UK Government to change the law on Prostitution to both better support vulnerable victims of this international trade and help reduce human trafficking into the UK for this purpose ( full report on scribd.com); other Reports she has overseen by the CPHRC include on Forced Organ Harvesting and wider Human Rights  violations  in China, and in Russia.

An example of a speech by Fiona Bruce on these issues can be found here. Fiona was also, for the past few years, a Co-Chair of the All-Party Parliamentary Group for North Korea, which sought to highlight the plight and suffering of the many millions of people there. Fiona has written and spoken extensively on this issue, and an example can be found here. You can find out more about Fiona's work here.

She has recently been appointed a Patron of Hong Kong Watch having expressed many concerns over recent years about the deteriorating human rights situation there.

Fiona is committed locally to promoting community life, local businesses, and voluntary activity and works closely with Cheshire East Council, Town Councils in Alsager, Congleton, Middlewich and Sandbach, as well as many Parish Councils, in support of the strong local communities in her constituency. She has vigorously led campaigns in for more funding pupils in local schools. She has strongly campaigned to keep Congleton War Memorial Hospital vibrantly serving the town of Congleton, including successfully challenging attempts to introduce inequaitable car-parking charges there, and together with others successfully campaigned to ensure that local A&E facilities in Macclesfield to stay open - confirmed November 2016 - and receive additional investment. She has worked hard to improve high speed broadband facilities for her constituency – a particular need for the many businesses in the area.

Fiona has effectively campaigned for better online protection for children from inappropriate internet material and unnecessarily explicit sex education; and successfully campaigned for financial education in schools, the Government introduced this into the curriculum for all school students. She constantly campaigns for better protection for the victims of Human Trafficking - she served on the Modern Day Slavery Bill Pre-Legislative and Legislative Committees.

She has passionately led calls for more support to strengthen family life, which she says needs to be addressed as a matter of social justice since relationship breakdown, particularly when it affects children, helps prevent people from achieving their life potential, and is a root cause of so many issues, including debt, homlessness, addiction, worklessness, mental health problems and loneliness in old age. Just one example of a speech on this subject by Fiona can be found here. She has brought in several amendments to Finance Bills over years, pressing for the introduction of a married person’s tax allowance – something the Government has now brought in. Fiona is the lead on the Strengthening Families Manifesto which she co wrote (Strengthening FamiliesManifesto.com).

On transport issues, which Fiona recognises are extremely important to her constituents, she successfully worked to obtain over £45m of Government funding to the Congleton Link-Road and funding for improvements to Junction 17 at Sandbach - more work on which she is pressing for - and working with Cheshire East Council has effectively obtained over £1m funding from the Government for the creation of a business case, now completed, to argue for a Middlewich Bypass. See here for just one of her calls for this. In October 2017, £46.8m was secured for the Middlewich Bypass enabling the project to move forward.

Fiona has clearly voiced her opposition to the HS2 rail proposals, which she has described as being “an inordinately expensive potential burden on my constituents without any justifiable business case in the current economic climate”. She has never voted for any Government motion for HS2. She campaigned for more Government funding to improve local roads and mend potholes in the constituency of Congleton, and in the year 2015-16 Cheshire East Council received £10.5m to do this. Having secured the funding for the Middlewich Bypass, Fiona continues to campaign for the re-opening of Middlewich Railway Station to passengers, something she has done for a number of years.

Fiona successfully campaigned vigorously against the proposed incinerator in Middlewich, which she considered a totally unfair and unnecessary imposition on the strong local community, raising this twice in Prime Minister's Questions, and continues to campaign against the ANSA Waste Site in Middlewich.

On sports provision for the community, Fiona has worked for years with Congleton Football Club, and now also with Eaton Bank School and Cheshire East Councillors to provide improved football facilities for the town, including the much needed 3G pitch. In Alsager, she successfully worked for six years for the development of the former MMU site to include community sports provision, something which is now well underway.

The issue she has spent more time on than about any other is protecting our green spaces. She says, 'I have campaigned locally, lodged countless objections, and spoken numerous times to protect open green spaces and valuable agricultural land from inappropriate development.' For an example of Fiona's speeches on this issue, see her recent effective campaign to see Neighbourhood Plans have more impact in planning decisions, and her very vigorous campaign, with the Goostrey community, that a large development in that village, which would have unsustainably overburdened local services, was stopped - see here for just one of her speeches fighting on this issue, with particular reference to the concerning impact on the critical international work of Jodrell Bank - which has now been named a UNESCO World Heritage Site. Fiona says: 'I am pleased that we have recently seen some successes with green fields protected in Goostrey (near Jodrell Bank), Wheelock and Congleton, and seen applications turned down elsewhere. But this fight goes on: you can be assured of my continuing commitment to it.'