Fiona speaks about planning and green spaces in Parliament 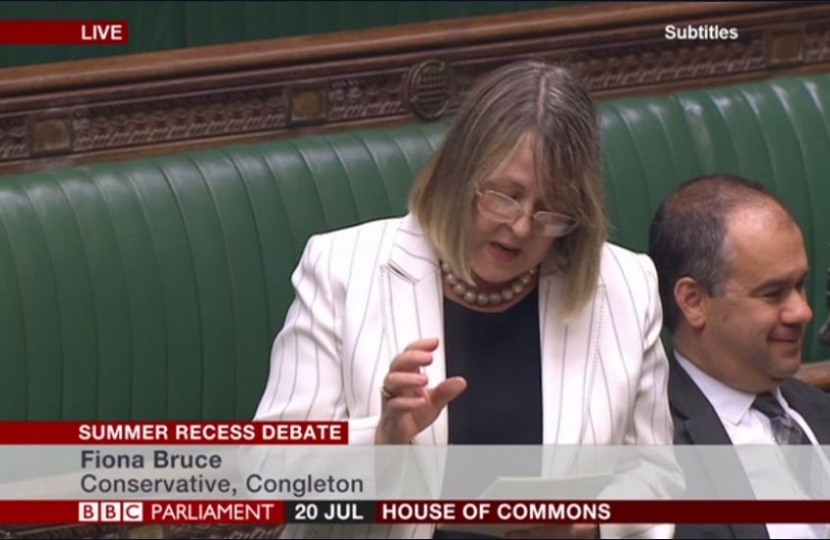 "I turn now to planning matters, noting that 27 July is the date scheduled for adoption by Cheshire East of its local plan. This will come after one of the most lengthy and complex examinations in the country. It is true to say that in the past I have not held back in this place from saying that areas in my constituency have been blighted by developers keen to grab green space and agricultural sites for inappropriate development. However, now that the local plan inspector has found that a five-year housing land supply has been identified, that battleground should—and, I believe, will be—a thing of the past. This is a new day. I call on the Secretary of State for Communities and Local Government to uphold the inspector’s view of a five-year Cheshire East housing land supply, and the terms of the local plan, together with the further several neighbourhood plans in place locally, and to reject any planning appeals to develop further greenfield or green space sites. This should now provide an effective means whereby inappropriate developments are stopped once and for all in my constituency and beyond.

I give credit to neighbourhood planning groups and town councillors such as Mike Benson in Sandbach, who have worked so hard, as I have here, to ensure that neighbourhood plans have a real impact. In Sandbach, where there is no housing need, there should now, in future, be the inference that no additional housing will be permitted other than in accordance with NDP—neighbourhood development plan—policies. Indeed, that is already happening. We need only witness the way in which the former housing Minister recently rejected a planning application for land to the rear of Park Lane and Crewe Road in Sandbach, directly on account of the need expressed in the Sandbach neighbourhood plan for an area of separation. Again, this shows a Conservative Government working together with a Conservative MP and Conservative councillors to deliver for local residents.​”