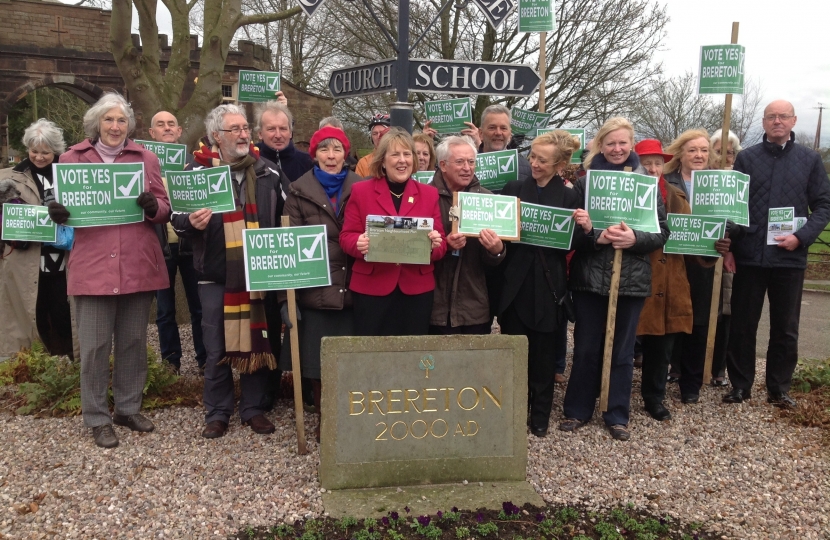 'I have been continuously concerned about the plethora of inappropriate planning applications in this constituency. I strongly believe that our fields and woodlands should be protected against excessive development. These are special areas of our country that we have a right to enjoy and pass on to future generations.

'I recognise that more homes need to be delivered to meet the demands of our increasing population. However, they do need to be in the right places. It is not only building on the Green Belt which concerns me but also building on green spaces within this constituency which, whilst not classified as Green Belt, are nonetheless equally as important to local people. This is why I have fought vigorously against applications by developers to build on such sites and why I am so disappointed that more protection is not available for green spaces. I have repeatedly made Government Ministers aware of this – including on individual cases of inappropriate planning applications[eg 1], and on the Neighbourhood Planning Bill [1][2], the National Planning Policy Framework, and Planning and Housing Supply.

'When residents raise concerns regarding planning applications I work hard to represent them. You will appreciate the enormous amount of correspondence and written objections this has involved, including on Appeals, there have been disputed applications in large numbers in Congleton, Alsager, Sandbach, Holmes Chapel, Goostrey, Brereton, Middlewich and elsewhere. Barely a day has gone by when I have not been fighting one planning application or another on behalf of residents. I have corresponded with literally thousands of constituents, and held and attended hundreds of surgeries, site visits and public meetings.

'In Parliament I arranged a number of key strategic meetings. As long ago as early 2012, I took the former Leader of the Council, Wesley Fitzgerald, and the former Strategic Director of Places, John Nicholson, to meet the then Housing Minister Bob Neill, who said that the way to challenge these applications was for the Council to produce with its Local Plan.

'Over the past several years, I have held numerous subsequent Ministerial meetings, including ones to which I have taken senior Council representatives, and all Ministers from the Department of communities and Local Government know, without a shadow of a doubt, how I believe that our lovely constituency has been badly served by the relevant legislation and regulations relating to housing planning applications. I have even had meetings with the Prime Minister, to whom I spoke personally about concerns at 10 Downing Street.

'I pay tribute to Sandbach Town Councillor Mike Benson, who, in his mayoral year, worked so hard to try to alter the planning regulations which so negatively impacted on our area - particularly, at that time, Sandbach. Together, in 2013, we met the Planning Minister Brandon Lewis, who I invited to meet Mike as Mayor, and other community leaders, to discuss their concerns. We also delivered their petition to 10 Downing Street.

'I also invited Housing Minister Nick Boles, in 2014, to a large public meeting in the constituency to meet residents face to face and to hear from them directly about residents’ frustrations about inappropriate planning applications. Again the key message relayed by the Ministers was that Cheshire East should settle its Local Plan. Nick Boles also highlighted the importance of Neighbourhood Plans. This was at a public meeting at Sandbach Town Hall, which I arranged to enable local people to speak face-to-face with the Planning Minister responsible for the regulations causing so much heartache in this constituency. That meeting was attended by the then-Leader of Cheshire East Council, and at that meeting Nick Boles highlighted the importance of Neighbourhood Plans. Immediately following the meeting, a call went out from the Council offering support to any neighbourhood wishing to produce a Neighbourhood Plans and I am pleased that these are now being developed and that, more recently still, in 2016 the Government announced a strengthening of the influence which Neighbourhood Plans have on planning decisions - something I and others had long pressed for. My speech in that debate can be found here.

'I am relieved that recently we have seen some successes with green fields protected in Goostrey (near Jodrell Bank) (well done to everyone at Goostrey who fought so valiantly to ensure that potential damage to Jodrell Bank's delicate instruments does not occur due to over-development nearby - it was a pleasure to work with you over such a long time to secure this), and more recently at Wheelock and Congleton, and seen applications turned down elsewhere. But this fight goes on: you can be assured of my continuing commitment to it, as the fight still goes on - although I am pleased that Cheshire East's Local Plan is now completed, which is key to protecting the spaces local people do not want build on. While Neighbourhood Plans have some influence, it is not - as we have sadly seen in Brereton - strong enough.

Congleton's Green Fayre at Congleton Town Hall provided visitors with tips, advice and freebies, all with the purpose of helping people to play their part in saving the planet.

This week Fiona visited the development in progress of the extensive facilities at Middlewich's Fountain Fields Park which will include:

The litter pick was part of a national campaign with over 13,000 registered volunteers taking part across the country including schools, cadet groups and other community groups.

"Enjoyed a lovely relaxing weekend walk at the Quinta Arboretum at the village of Swettenham in my constituency - well worth a visit especially later in the year when the famous lavender field is in bloom."

Fiona welcomes the Government’s vision for a greener future

Fiona speaks about planning and green spaces in Parliament