Fiona receives petition from Aid to the Church in Need 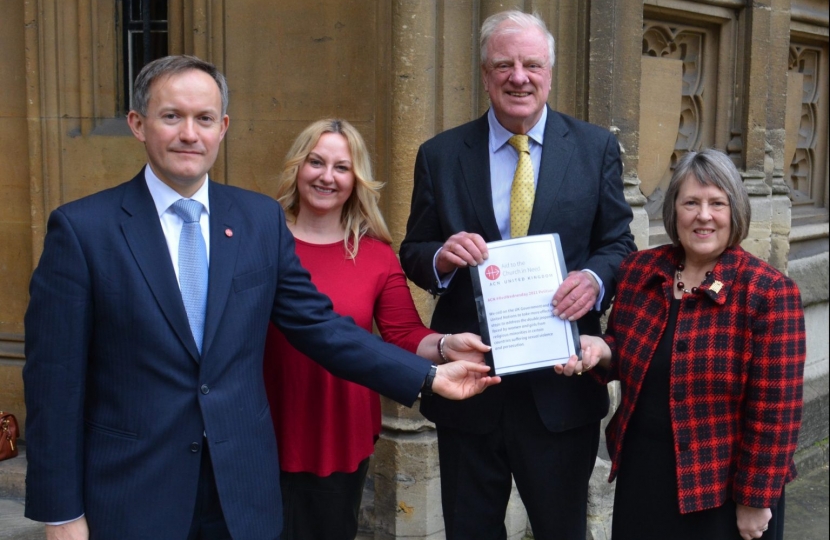 This week in Parliament Fiona, in her capacity as the Prime Minister's Special Envoy for Freedom of Religion or Belief, was presented with a 3,210-signature petition by Aid to the Church in Need (ACN).

The petition was key to ACN’s #RedWednesday 2021 campaign which climaxed with the launch of the charity’s report Hear Her Cries – The Kidnapping, Forced Conversion and Sexual Victimisation of Christian women and girls.

Also present for the petition hand-over were Conservative MP Sir Edward Leigh, Scottish National Party MP Dr Lisa Cameron and Morris Johns, Secretary to the All-Party Parliamentary Working Group for Pakistan Minorities, who have all campaigned for Christians and other minority faith girls and women.

“I am extremely grateful to ACN for highlighting the plight of minority faith girls suffering forced conversion and forced marriage.

I find it very distressing that girls and young women suffer in this way.

In my role, I am committed to action to stop this denial of freedom which impacts the lives of so many young girls in such a fundamental way."

ACN’s petition will also be submitted to the United Nations.

This week Fiona, in her capacity as the Prime Minister’s Special Envoy for Freedom of Religion or Belief (FoRB), spoke at the launch of the Open Doors World Watch List 2022.