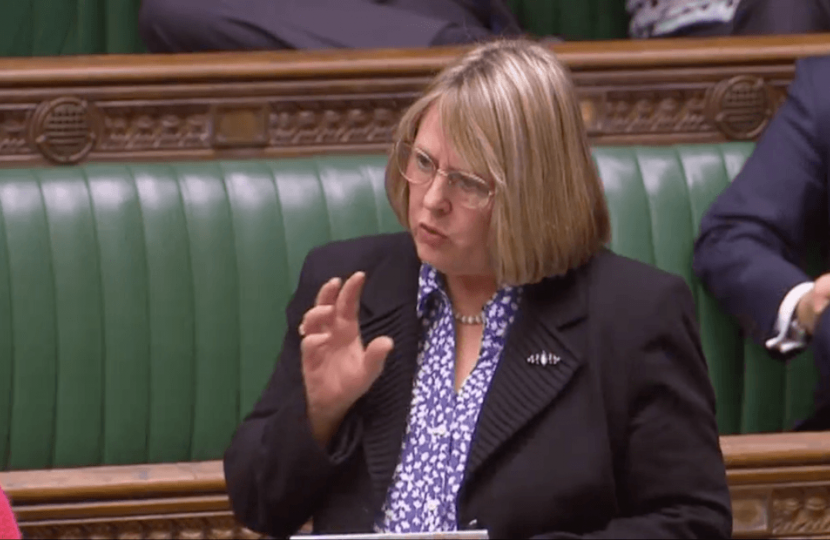 Speaking in the Commons this week Fiona Bruce MP lambasted the Government on behalf of head teachers in her constituency for school funding shortages saying:

“Before the debate, I wrote to every primary and high school headteacher in my constituency. All seven senior school headteachers, whether in free schools, academies or multi-academy trusts, sent a collective response stating that they cannot remember morale being so low, the main reason being the lack of funding into schools, and that standards—high in Cheshire East—will be adversely affected.

The heads asked me to bring four key messages to Parliament. I will quote their words, which are strong: “The Government must stop misleading the country by stating that record amounts are being spent on education when”, according to the Institute for Fiscal Studies, since 2010, in Cheshire East “the amount spent per child has fallen in real terms by 8%.

”Secondly, they say: “The Government must commit to an index linked approach to the national formula so that all schools are able to deal with changes that are outside of their control, such as increased employer NI and pension contributions”, as well as underfunded pay awards and other cost pressures. They say that there has been a 10% rise in staff costs in our schools since 2017 alone.

Their third and fourth points are: “The Government must demonstrate that every school in the country will gain enough funding via the Age Weighted Pupil Unit to run a school regardless of the characteristics of its pupils.​ The Government should provide a long-term commitment to educational funding in a similar manner to the National Health Service.” A major issue, say the heads, is that schools go from year to year with no annual Government statements or decisions about school funding, so there is no long-term planning. That makes it impossible for heads to plan or budget for the future. I have known most of them for many years and, dedicated as they are, it is remarkable that they carry on under the relentless pressure they experience year on year. One says: “the role of the Head Teacher is becoming an impossible responsibility to fulfil, due to significant constraints on the financial viability of schools.” To quote the seven heads again, “school finances in Cheshire East are in a terrible state, despite the NFF promises made in July 2017.”

The Schools Minister knows that that was when funding of £4,800 per secondary school pupil was announced as a result, as we have heard, of a sustained campaign by headteachers, including those in my constituency. In Cheshire East, however, the heads tell me that they are not receiving £4,800. Instead, they receive: £4,018 for every key stage 3 child, £4,804 for every key stage 4 child and £3,971 for every key stage 5 child. That represents a reduction of 1% each year since 2014. Overall expenditure on school sixth forms has fallen in real terms by 16.3% since 2014. Funding for 16 to 19-year-olds is now 21% lower than funding for 11 to 16-year-olds, which makes it very difficult to run a broad sixth-form curriculum.

What is the impact of such figures on our schools? The heads state: “Pastoral support…cut or removed at a time when the need is greater than ever…Class sizes have increased to unmanageable numbers and teacher contact ratios have been increased…over what is acceptable. SEN needs of pupils are not being met as they should. Courses have been cut, especially at KS5…denying many young people the opportunity to study what they want to. The…potential closure of multiple post-16 institutions across Cheshire East…Schools are having to continually restructure at all levels…to save money”, reducing support for young people and staff year after year. Many schools have recently undergone ICFP—integrated curriculum financial planning—reviews, as recommended by the Government. The independent advisers said they cannot see where any savings can be made without the impacts I have just listed.

I turn now to primary schools. Many heads wrote to me—too many to quote them all, so I will quote just some: “Finding it impossible to balance our budget.” “Costs continue to escalate outside of our control from NI increases, regrading for Living Wage, national pay rises for teachers and non-teaching staff, local government pension increases, cost of energy and utilities, and general inflationary pressures.”​ “If a child starts my school after the first week in October, I will receive no funding for them until 22 months later.” “SEND Funding...is made up of a number of proxy factors, but 25% of this is deprivation. Just because you may have special needs, it doesn’t mean you’re deprived and...just because you’re deprived doesn’t mean you’re special needs...The current formula makes a postcode lottery out of special needs funding.”

“In 2019-20 in Cheshire East...39 out of 124 primaries will get less than last year. 31% of primaries will lose an average of 3-4%...The very small schools, such as rural schools, suffer further loses: 8 out of 16 small schools will get less than last year, with an average loss of over 8%”. “The whole NFF formula needs to be revised...and…in Cheshire East schools actually receive just £2,928 for every primary aged child”— not the £3,500 that they should get. Another head said: “Funding for SEN is now at crisis point in Cheshire East.”

I want to finish with the comments of a new head, which moved me deeply: “As a new Head, I have been overwhelmed by the constraints of our budget...We are particularly struggling with support for pupils with additional needs...support from the SEND Team at County has been limited because they are overspent and cannot afford to meet children’s needs...Services such as Special Needs, Safeguarding and Looked After are overspent and cannot offer the support and guidance that school and families need...The lack of funding in education in Cheshire is causing great hardship...It is heartbreaking to be supporting a child who needs alternative provision and to have to explain to their parents that there is nothing more you can do...If we don’t support our more complex children, we risk pupils being hurt, property being broken, and learning disrupted...We have a number of children suffering with mental health issues, and are witnessing self-harm”— this is at primary-school age.

They continued: “We frequently find Health and Safety issues, but are unable to correct them because we don’t have the funds...I am also concerned that talented staff will leave the profession.” I note that the petition for a longer debate on fairer funding had been signed by 1,424 of my constituents as of this morning. That is 1.5% of them. I will of course speak again in that debate on 4 March, because I have much more to relate from my teachers, but time does not permit today.”