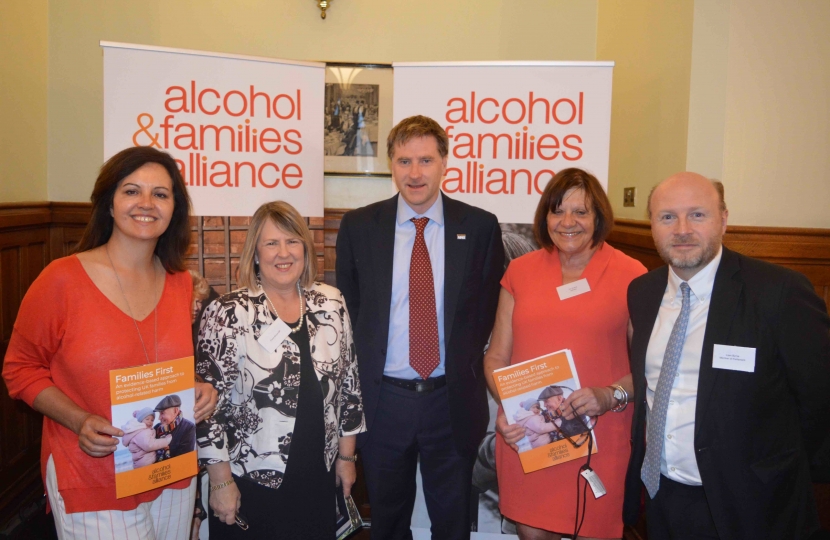 In July Fiona spoke at the parliamentary launch of a new policy report “Families First” from the Alcohol and Families Alliance (AFA). The report examined the impact alcohol has on families and children in the UK and the gaps in support, as well as making policy recommendations for closing those gaps. The report finds that while almost 200,000 children live with at least one alcohol-dependent adult,[1] there is very patchy provision of support nationally, and for families affected by alcohol, and that training is needed to help professionals identify parental drinking problems and show families where to get help.

Alongside this, the Families First report raises concerns with alcohol's position in wider society – particularly its increased availability in recent years – and how this works against families hoping to avoid harm. It calls for action on the price of alcohol, such as minimum unit pricing which has been introduced in Scotland.

Fiona, Chair of the All Party Parliamentary Group on Alcohol Harm, welcomed the report and its recommendations, commenting:

“There’s nothing wrong with responsible drinking, but when it gets out of control it impacts not only the individual concerned but also their family, friends and work colleagues. Yet often despite this being a widespread problem as this Report evidences, there’s no one to talk to when problems occur, and support for families is poor and patchy in different areas. It’s welcome that the Government has recently set aside £6 million to help children whose parents or carers are alcoholics - but we need to ensure it promotes best practice support for them right across the country.  This Report makes several sound recommendations - including encouraging an unembarrassed national conversation about drinking, and emphasising that introducing youngsters themselves to alcohol too soon can often lead to serious problems for them and their families.”

Also speaking at the event, Health Minister, Steve Brine, welcomed the report, promising a response from his department, and praised the voluntary sector organisations working in this field as crucial partners in tackling this issue.

Vivienne Evans OBE, Chief Executive of Adfam who are the secretariat of the AFA, commented:

“It is excellent to have the support of Fiona Bruce MP for this report and the AFA. This event showcases the need for government to take prompt action to support families in the upcoming alcohol strategy and we are hopeful that with backing of advocates such as Fiona Bruce MP, we can see the recommendations this report lays out included in the strategy.”

[1] Pryce, R., Buyk, P., Gray, L., Stone, T., Drummond, C., & Brennan, A. (2017) Estimates of Alcohol Dependence in England based on APMS 2014, including Estimates of Children Living in a Household with an Adult with Alcohol Dependence. Prevalence, Trends, and Amenability to Treatment. Public Health England.