Fiona highlights grave concerns regarding violence against Christians in Nigeria 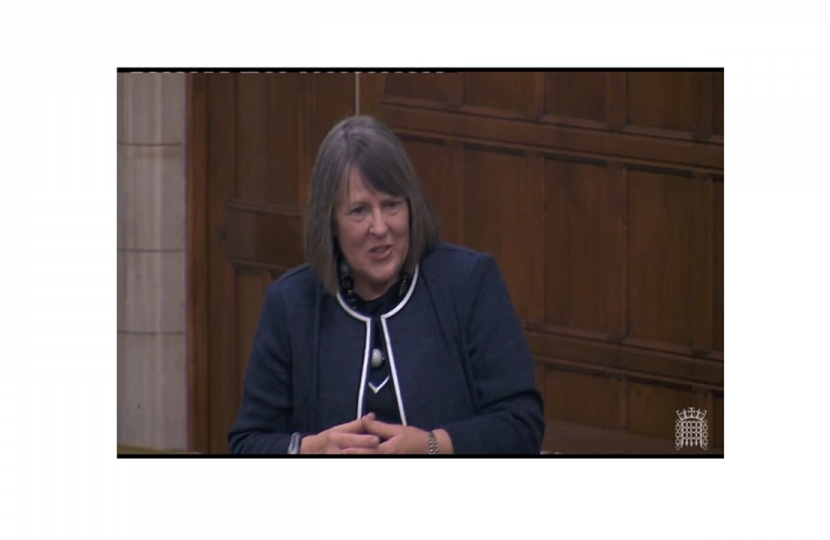 Yesterday in Parliament Fiona contributed to a debate which shone a spotlight on Violence against Christians in central Africa. Fiona's contributions focused specifically on the plight of Christians in Nigeria.

Fiona's speech can be read below - the full debate is available here.

I, too, want to focus on Nigeria. There are multiple drivers of the deeply concerning and increasing causes of violence there, including issues that are specific to a local area’s history, politics and ethno-linguistic make-up, and resource competition. However, we must call out the reality that, today, is this: extremist Islamist ideology is the key driver of violence across Nigeria. The victims are Christians, Muslims and those of other faiths or of no faith at all. I visited Nigeria in 2016 and took the then head of the Christian Association of Nigeria to meet UK Department for International Development representatives to convey to them that the root of so much violence then was religious tensions. As the Prime Minister’s special envoy for freedom of religion or belief, I am mandated to lead on the full implementation of the recommendations of the Bishop of Truro’s 2019 review by July 2022. That review describes perpetrators of atrocities in Nigeria as “militant Fulani Islamist herdsmen” and concludes:

In June 2020, the all-party parliamentary group published its report, “Nigeria: Unfolding Genocide?” That two-year in-depth inquiry described in detail violations of freedom of religion or belief. The report was taken extremely seriously by the US State Department. I have been told that it contributed to the US designating Nigeria as a country of particular concern. I know from meetings that I held earlier this year, from elected parliamentarians in Nigeria, from a governor there and from NGOs how much that report was appreciated by them in Nigeria. It is cited it as shining a light on the grievous violations of FORB in that country.

The impact of this violence on the young and the upcoming generation is acute. Indeed, a recent UNICEF report stated that 1 million Nigerian children are missing school due to mass kidnappings. Their parents are now too frightened to send them to school. The knock-on effects of that on their loss of education and their ability to earn a livelihood are acute.

I welcome the new Minister to her post. I have had the pleasure of working with her and seeing how effectively she worked in her previous role. When she responds to this debate, I hope that she will agree to meet me, the hon. Member for Strangford and other officers of the APPG about our 2020 report and subsequent concerns. Since that report, those concerns have been exacerbated and are even more pressing. Dr Obadiah Mailafia, a former Nigerian presidential candidate and former deputy governor of the Central Bank of Nigeria, who provided oral and written submissions to our all-party parliamentary group inquiry, sadly died on 19 September 2021 after allegedly receiving poor treatment. In a speech that he delivered just a few days before he died, at a symposium entitled “The role of the Church in nation-building”, Dr Mailafia had warned that the country was “certainly exhibiting the features of a failing state in terms of the kind of violence we are seeing, widespread insecurity, terrorism, the abuse of humanity, criminality, rape, killing, maiming and destruction. We are a failing state.”

“Rival groups control territory. Boko Haram is in control over half of Niger State and if they successfully take over Niger, Abuja will be a walkover. Government cannot provide security for the people. Nowhere is safe in the country. The forests have been taken over by foreign invaders. The economy is collapsing. There is the collapse of the institution. Police, university’s standards are low. Corruption has taken over in the country.”

On 4 August 2021, Intersociety-Nigeria released figures compiled from documented cases of violence that are deeply disturbing. The statistics reveal that in the past 12 years, 43,000 Christians have been killed by Islamist Fulani militia, 18,500 have disappeared—many, I have no doubt, also killed—and 17,500 churches have been attacked. Ten million people uprooted in the north, 6 million forced to flee, 4 million displaced and 2,000 Christian schools have been lost. Within that timeframe, 29,000 Muslims were also killed. The report states that moderate Muslims are targeted for several reasons, “as collateral mistakes or punishment for those collaborating with the ‘unbelievers’ or in revenge for state actor attacks against their targets, or for purpose of enforcement” of extreme interpretations of Islamic sharia law.

Earlier this year, I read a well-evidenced report on the impact of covid from testimonies on the ground in Plateau state and Kaduna state. I will pass details of that well-evidenced, authoritative and lengthy report onto the Minister. I quote briefly from it:

“In Nigeria, the attacks on Christian villages during the pandemic were religiously motivated. Local politicians are perceived to deploy security forces and distribute aid along ethno-religious lines. Participants reported”—

that is, participants of the research for the report—

“that soldiers appear indifferent to their communities and fail to pre-empt or repel attacks.

In Nigeria, the lack of protection and security for Christian villages in Kaduna and Plateau exacerbates the impact of covid-19.”

It goes on to say:

“The loss of access to schooling for children is universal, across all the groups. It is exacerbated in Nigeria by the attacks on Christian villages, where schools and churches have been burnt down, and teachers have fled.”

Looking at the Christians, even in their facial outlook, the research team talks of them being

“representing anxiety of an ambiguous future caused by the loss of husbands, children, wives, relatives and their sources of livelihood.”

Christian men in Plateau state spoke of attacks, which in Kujeni took place during Sunday mass. They felt the response from the Government was inadequate and that the attacks were religiously motivated, as they targeted Christian villages, not neighbouring Muslim villages. One said:

The critical deficit of governance is evident in the lack of security services provided by the state.

This morning, I had the privilege of speaking with an individual who has direct knowledge of what is happening in Nigeria now. He is an authority on the issue. I want to quote his words. They are lengthy. Just a few hours ago, he told me this:

“The violence is getting worse by the day. It is affecting the whole country. ISWAP”—

that is, Islamic State West Africa—

“has taken over the command of Boko Haram and have joined forces with the Fulani militants. The Governor of Niger State has declared that Boko Haram and ISWAP have planted a flag just 2 hours from Abuja. Just 2 weeks ago they have new headquarters set up in Southern Kaduna. With the developments in Afghanistan they have become emboldened. If Nigeria collapses it’s a fragile area surrounding it—there is an impending implosion—Chad, Niger, Cameroon, Mali, Ghana, Central African Republic.

In the North West there is Muslim on Muslim violence—Sokoto, Kebbi and Katsina. The Governor of Katsina has said that people doing the violence are Muslims, Fulani and some foreigners. People cannot send their children to school for fear of violence and abductions. No reasonable parent can send their child to school…People dare not farm their land. The situation of Christians is pathetic.

Recently, a bus carrying Muslims was attacked, and there was anger across the country. This does not happen when Christians die.

Muslims are dying at the hands of fellow Muslims, however, the attacks are incessantly on the Christian communities, whilst the federal government remains silent.”

“If only the British Government would regularly call out this violence against Christians, and ask the Nigerian Government to do something.”

I asked him what he wanted the Nigerian Government to do. He said:

“People are being attacked with AK47s and machetes and more recently the Islamic jihadists showed they have the capacity to shoot down an aircraft—they did so. Two weeks ago, they attacked the Nigerian Defence Academy in Kaduna and killed two officers and took one captive, released three days ago. What they want is to take over Africa.”

I will close with this: we need to acknowledge the scale of ethno-religious violence, and to urge the Nigerian Government to hold those responsible to account. Security and stability need to be ensured for all communities, especially in the north and middle belt regions, and the Yoruba and Igbo people urgently need to be provided with the help and protection that they are crying out for.

As fellow parliamentarians in our all-party group, such as the noble Baroness Cox and Lord Alton, have said previously, for the sake of all the people in Nigeria, and for the sake of security across the continent and beyond, we urge the UK Government to press the Nigerian Government swiftly to address this violence, and to ensure protection, justice and recompense for victims of all ethnicities, without bias.