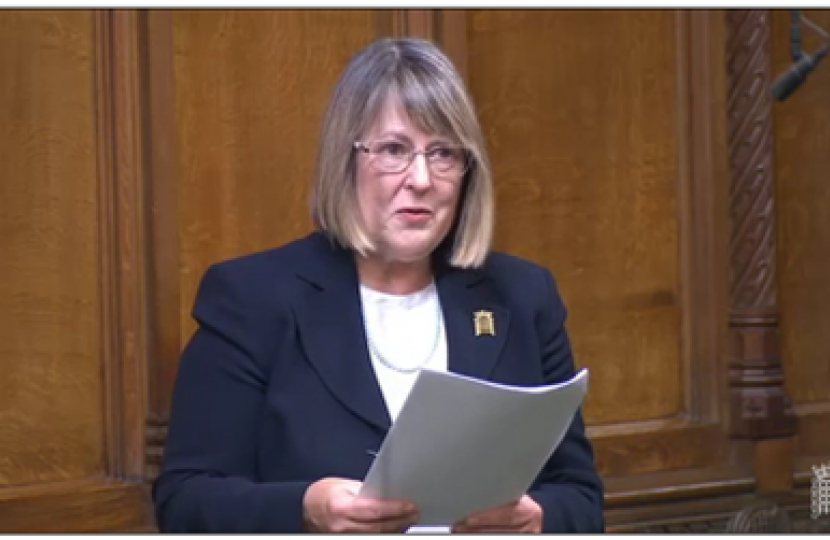 "It is a pleasure to serve under your chairmanship, Ms Nokes, and to follow the hon. Member for Strangford (Jim Shannon), who is always so faithful in his commitment to these debates. I commend my hon. Friend the Member for Hendon (Dr Offord) for securing this debate and for his excellent speech. I look forward to the Minister’s responses to his incisive questions.

There was a tale of two speeches at the international ministerial conference on freedom of religion or belief here in London two weeks ago.

First, in her keynote speech introducing the conference, the Foreign Secretary commendably called out last month’s atrocity in Nigeria, when over 40 people were killed simply for being in a Catholic church in Ondo state, celebrating Pentecost. But that was no isolated incident, because on the same day, 5 June, there were reports from Kajuru in south Kaduna of Fulani bandits attacking the indigenous Adara people, aided by an air force helicopter, killing 32 and destroying a church of the Evangelical Church Winning All. Not a single terrorist was killed; 32 members of that church were. The following Sunday, 12 June, there were further reports of approximately 50 Catholics killed just before morning mass in Edumoga in Benue state, north-central Nigeria. In one week alone, over 120 innocent civilians were slaughtered in north-west, north-central and south-west Nigeria.

Indeed, it has to be addressed on the ground. It is heartrending that night after night, people are going to bed fearful of whether they will wake up.

The Minister will no doubt be keen to throw something of a contextual narrative on my emphasis on religious-based violence and religious targeting of mainly Christian victims. She will also likely note that religious identity can be a factor in incidents of violence in Nigeria and that Christian communities have been victims but emphasise that root causes are often complex and frequently also relate to competition over resources, historical resources and criminality. She might also factor in the pressing challenges of climate change and global food shortages. I ask her, however, to interrogate the repeated number of attacks going on in the central and north-west regions of Nigeria. They are executed and co-ordinated by well-organised and well-funded groups, including the Fulani Islamist militia groups, as well as other terrorist groups, such as Ansaru in Kaduna state.

The appalling atrocities by those perpetrators, using sophisticated equipment including a helicopter, cannot simply be characterised as atrocities by local bandits. The killings going on, such as those last month, are not simply a clash between farmers and herders. Much attention is given to the security challenges in north-east Nigeria, rather than the central parts of Nigeria experiencing such devasting attacks. Many villages have been destroyed, and thousands of people are displaced. Some reports say that the Fulani Islamist groups have killed more people than Boko Haram in the last two years and are more vicious in executing their atrocities.

Efforts to rightly avoid simple descriptors of Nigeria’s insecurity as a religious conflict should not fail to properly diagnose the security situation facing Nigerians who get in the way of Islamist militants. The Minister will rightly reference that the nearly 350,000 Nigerians who have died as a result of Islamic insurgencies include a large number of Muslim victims, as well as indigenous, humanist and Christian believers. As the Foreign Secretary recognised two weeks ago, those are grievous violations of the right to freedom of religion or belief, a right that should be available for everyone, everywhere—a universal right that only 10 days ago brought together over 1,000 delegates from 100 countries for the London international ministerial conference on freedom of religion or belief. However, a country whose representative at that conference sadly does not truly get what is happening in Nigeria is Nigeria.

The second speech to which I wish to draw the House’s attention is that of the Nigerian high commissioner to the UK, who pledged to uphold freedom or religion or belief without hindrance, as guaranteed in Nigeria’s constitution, but then declared that insecurity has nothing to do with religion—refusing to recognise religious-based and targeted violence. Sadly, that speech risks perpetuating impunity for religiously motivated violence across Nigeria. It means that when the young student Deborah Samuel was horrifically lynched in Sokoto on 22 May of this year, having been accused of blasphemy—which was rightly condemned by religious leaders—no one has been held accountable for the severity of that crime. It is why there are reports of security services being at best absent and at worse complicit in violence perpetrated by militants.

In conclusion, I ask that, rather than follow the line of the Nigerian Government on security and freedom or religion or belief, the Minister follow the recommendation of the Foreign Affairs Committee’s April 2022 report. It stated “The integrated delivery plan should include concrete steps for how the UK Government will support the Nigerian Government in promoting freedom of religion and belief, as well as preventing violence against women and girls, across their engagement activities in Nigeria.”

Responding to the debate on behalf of the Government, Vicky Ford MP, Minister for Africa said,

"Intercommunal violence is having a devastating effect on those communities, and the conflicts are highly localised and varied. As raised by my hon. Friend the Member for Congleton (Fiona Bruce), who is very wise, it is clear that religious identity can be a factor in instances of violence. In some instances, it can be the main factor; indeed, in some instances it is the main factor. I discussed this with religious leaders, non-governmental organisations and regional governors during my visit to Nigeria in February. They made it clear that the root causes of these tensions are often complex, and also include competition over resources, historical grievances and criminality. That is why it is right that the UK is supporting local and national peace-building initiatives to tackle intercommunal violence, including through our work with the Nigeria Governors’ Forum and National Peace Committee.

However, the UK remains resolute in its commitment to defending freedom of religion or belief for all, and to promoting respect between religious and non-religious communities. We hosted a successful international ministerial conference the week before last, bringing together over 500 delegates from more than 60 countries across the world. I thank my hon. Friend the Member for Congleton for the tireless work that she does; the conference would not have been the success that it was without her work. Her role as the Prime Minister’s special envoy for freedom of religion or belief has had very far-reaching consequences, and I know that everybody across the House is deeply grateful for her work.

The Nigerian high commissioner attended the conference, but so did many representatives from across Nigeria, from groups promoting peace building, social justice and interfaith relations. I understand that the conference was incredibly helpful in helping different organisations to listen to those from other countries—to discuss their issues and similarities, to see what has and has not worked, and to support those networks."