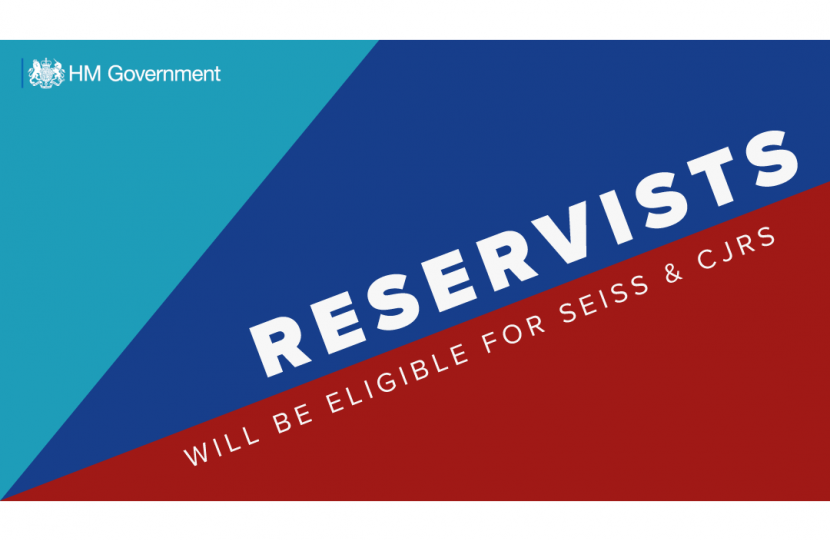 The Chancellor, Rishi Sunak MP, said serviceman and servicewomen who come back to their day job after completing a period of active duty will be able to be furloughed by their employer under the recently extended Coronavirus Job Retention Scheme (CJRS).

He also announced that self-employed army, navy and airforce reservists who are currently ineligible for the Self Employment Income Support Scheme as a result of their service will be able to access a grant.

"Reservists embody the best of our nation – in our hours of need, they rise up to the challenge and leave their everyday lives behind to serve our people.

It is only right that we do everything we can to support them when they return to civilian life during these challenging times."

To enable the introduction of more flexible, part-time furloughing, and support those already furloughed back to work, CJRS claims from July onwards will be restricted to employers currently using the scheme and previously furloughed employees.

However, as some reservists will have been in active service during the outbreak and will be returning to work after this cut-off point, they have been exempted from the restriction - providing they work for an employer who has previously furloughed employees.

The CJRS has so far helped 1 million employers across the UK furlough almost 9 million jobs, and the SEISS has seen 2.6 million claims submitted with a total value of £7.5 billion.

More details of the changes will be included in updated guidance, published this week.

Reservists who currently cannot access the SEISS as a direct result of their service in 2018-19 will be able to make a claim for both the first and second SEISS grants, and further information on how to do this will be published shortly.