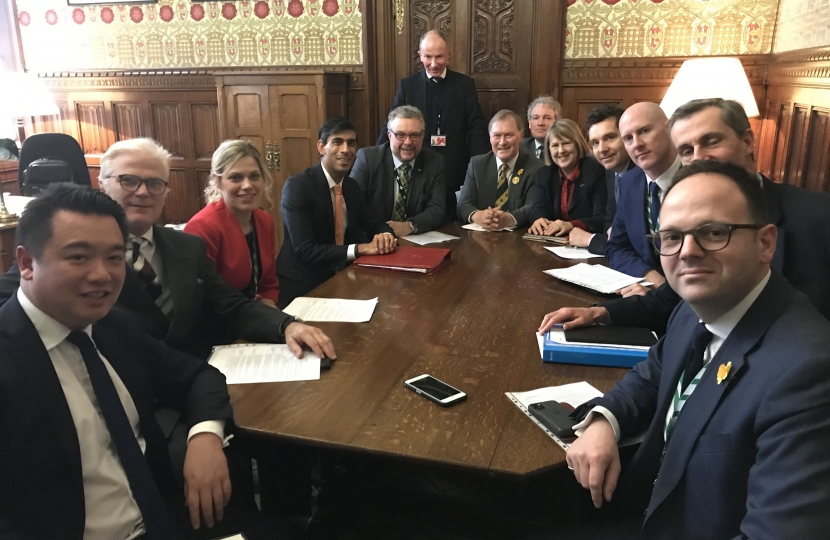 Kindness was a hallmark of David’s character; indeed, he was due to come to Sandbach in the New Year as my guest speaker at a constituency dinner; it was characteristically kind of him to be willing to travel some distance from his Essex constituency to do so.

David would doubtless have recounted many amusing stories from his recent memoirs after almost four decades in Parliament, “Ayes & Ears: A Survivor's Guide to Westminster” – he had a great gift of humour! He was rarely sighted without a beaming smile.

We had much in common – not least in our desire to be dedicated constituency MPs, not aspiring to climb the Ministerial ladder. David said in the House of Commons, we “came into politics to help improve people’s lives.”

And he did so in so many ways; he supported, for example, over several years my campaign for Family Hubs of which there are now over 150 across the country (the attached photo shows David seated next to me, with MP colleagues, in the Chancellor of the Exchequer’s office making our case for funding for Family Hubs).

When I was appointed Chair of the Pro-Life All Party Parliamentary Group, now almost ten years ago, David said “Fiona, whatever you are doing, just count me in.” He was true to his word.

Just a few days ago in my role as the Prime Minister’s Special Envoy for Freedom of Religion or Belief (“FoRB”) I contacted just under 100 MPs in the All Party Parliamentary Group on FoRB, of which David was a member, to contribute to a Parliamentary debate on FoRB. David was the very first to reply – and by return – saying “very happy to support.”

I want to assure constituents that nothing will ever stop me being accessible to you; just as this past weekend when after returning from Parliament I spoke to a community group in Alsager on Thursday evening; held a surgery in my constituency office in Congleton on Friday; and a surgery in Middlewich Library on Saturday.

I also put on record my heartfelt appreciation for my dedicated constituency staff, Stephanie, Harriet (both of whom have now loyally worked for me for over ten years), and Bernadette, who work so hard to support my role as your MP, and without whom I could not serve the people of this community as I seek to do.

In a day when those who hold fast to the Christian faith are sadly often marginalised, derided, even mocked, I hope that the many warm reflections on the life of Sir David Amess MP, a man who so clearly lived his faith out, may give many pause for thought.

Sir David made Parliament better; he is in a better place now; may the countless messages and tributes of love and respect for him, both from within Parliament and beyond, comfort his family at this sad time.