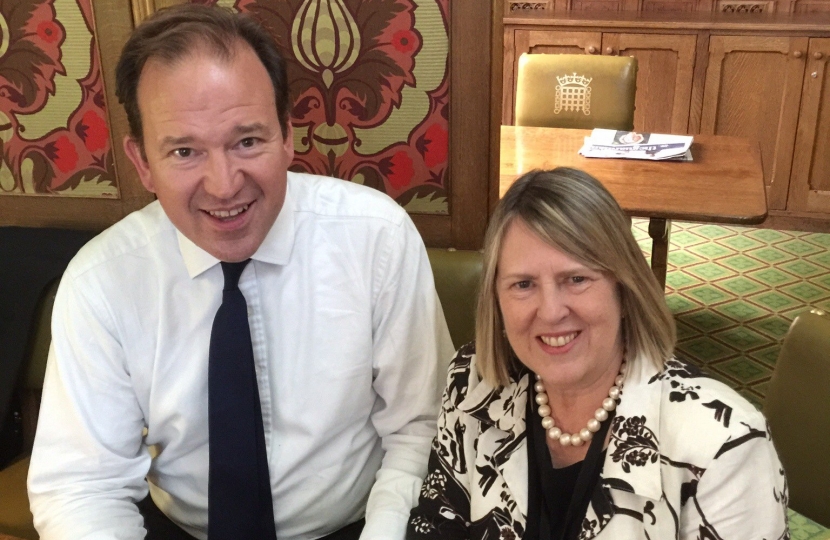 Following the recent General Election Fiona Bruce has spoken twice in the House of Commons and and recently met with new Roads Minister, Jesse Norman MP, to press for funding to build the Middlewich Bypass.

“I was determined to ensure that the new Roads Minister is clearly aware of the huge advantages which construction of the Middlewich Eastern Bypass will bring to the local community and wider region – not least in reducing chronic congestion through Middlewich, improving air quality in the town, and opening up employment land for up to 2000 new jobs.

As I told the Minister, the Business Case produced by Cheshire East Council this spring for the bypass demonstrates so many benefits that I believe it could not be bettered by any other town competing for this bypass funding.  There is tremendous untapped potential for improvements in Middlewich which this bypass would act as a catalyst for – for example the reopening of Middlewich Railway Station to passengers.

As I gave the Minister a copy of the Business Case I also made sure that he knows that Middlewich people have been waiting around 30 years, which is far too long!”

The two most recent speeches by Fiona pressing for bypass funding are:

"I want to draw the Minister’s attention to something that I hope is already front and centre of his desk: the well progressed application for a Middlewich eastern bypass. It has been a 30-year wait, and the support in Middlewich and beyond is strong. It would open up employment land for 2,000 jobs, which would help to transform the local and wider economy. It would reduce congestion, and not only through Middlewich. That congestion is chronic, and not only at peak times. The bypass would improve transport efficiency from the M6 across that part of Cheshire to the west. Middlewich is a severe bottleneck, which is holding back economic development in the area.

I am grateful that the Government granted business case funding last year under the fast-track scheme of the large local major transport schemes programme. The business case was produced this spring. As time prohibits my speaking about it in detail now, I hope that the Minister will allow me to hand him an executive summary of the business case after the debate. It was ​produced by Cheshire East Council with the support of the local enterprise partnership, and it was the only one proposed by that large unitary authority.

The council leader and I were due to discuss the matter in a meeting with the Minister’s predecessor—now the Exchequer Secretary to the Treasury, my hon. Friend the Member for Harrogate and Knaresborough (Andrew Jones)—before the election intervened. I hope that the Minister will look favourably on the idea of putting such an appointment in his diary soon.

Middlewich is a fine historic town with an aspiration to grow, including by taking in new housing, which the scheme would also support. That is not something that every town in Cheshire wants. The road would also bring benefits by facilitating HS2 construction and operation for the nearby link with Crewe, and the reopening, we hope, of Middlewich railway station for passengers.

I want finally to make a brief mention of Congleton. The Congleton Sports Trust’s vision for the future, following the successful Tour of Britain through Congleton, is a project spearheaded by the deputy mayor, Councillor Suzie Akers Smith, to improve circumnavigation of the town. Obtaining funding for that is proving challenging. The project would facilitate the improvement of infrastructure across the town, and make safe cycling possible—including for children going to school. My key message to the Minister is that for rural and semi-rural areas it is proving challenging to find cycling funding. Will Ministers look at that again?"

“… [E]ffective joint working resulted in £1.25 million being provided for the Middlewich eastern bypass business case. That extremely convincing business case, showing wide economic and wellbeing benefits, was produced by Cheshire East Council this spring. I need not go into further detail about that now, as I have spoken about it several times in this House. I am grateful to the Roads Minister, my hon. Friend Jesse Norman for meeting me again this week and listening so carefully as I pressed for funding from the Government towards the construction costs of approximately £56 million. That would unlock employment land for up to 2,000 jobs and support the reopening of Middlewich railway station for passengers, linking it to a Crewe hub for HS2, which, in turn, would be a springboard for wholesale economic development and connectivity across the region.”