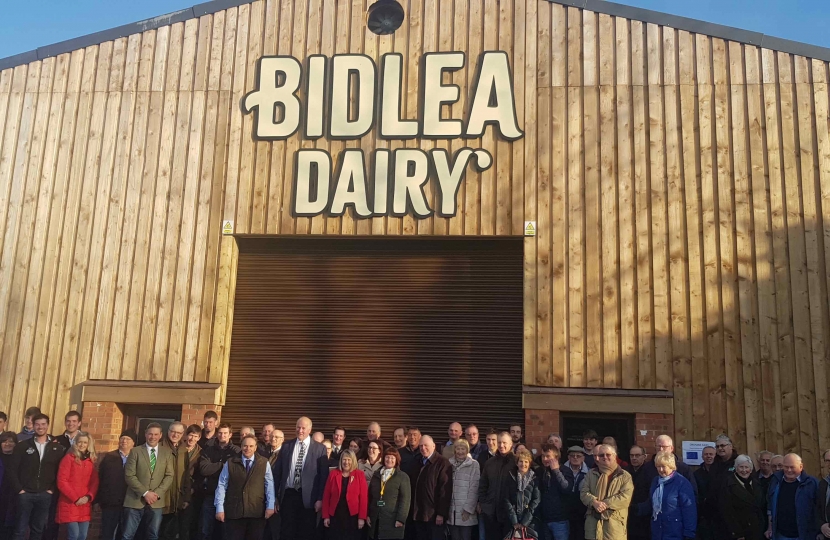 On Friday 14th December Neil Parish MP met with local farmers at the request of Fiona.

The meeting was held at the family farm of Ray Brown in Twemlow where Mr Brown’s new project, Bidlea Dairy, which will open soon, was showcased.

“This meeting came directly out of a number of discussions I have had with farmers in my constituency this year. Neil Parish MP is the “Farmers’ Champion” in Parliament, being a farmer himself, which is why I was so keen to invite him to hear directly the concerns of Cheshire farmers, which, as Chair of the Environment Food and Rural Affairs Select Committee, Neil is ideally placed to take up in depth in the House of Commons. I was delighted that so many farmers turned up - over 70 people attended the meeting – and that with regard to a number of issues raised, such as Leader Scheme Funding, Rural Farm Payments, the Agriculture Bill currently under consideration in Parliament and maintaining markets for the high quality UK farm produce, Neil proposes to take these back to Government Ministers, or scrutinise some of the issues raised through his Select Committee.”

“I was very pleased to be invited to Fiona Bruce’s constituency to talk to her farmers and explain the Agriculture Bill – the first Agriculture Bill for 70 years – a fundamental change with environmental management very much at the forefront of the Bill. I was very keen to reinforce the need for food production across all sectors of agriculture, Cheshire being particularly famous for milk and cheeses.  I am also very keen to work with the farmers of Cheshire, along with Fiona, to support and enhance the excellent farming and food production within the county of Cheshire and across the country as well as making sure that the future imports of food meet our high welfare standards.”