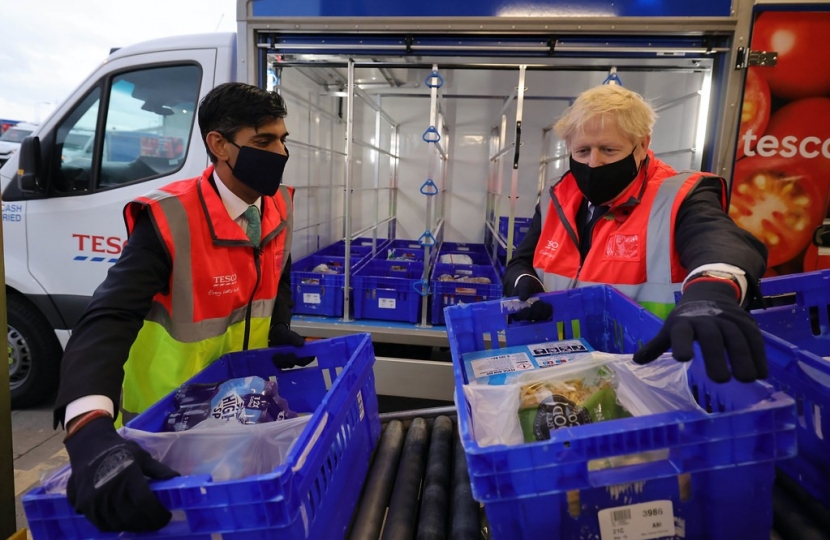 This week the PM and I took some extra steps to show, once again, we're delivering.

Tesco visit aside, on Monday I updated the House on our plans for one of the UK’s most productive and innovative sectors: financial services. As we leave the EU and start a new chapter in the history of financial services in this country we want to renew the UK’s position as the world’s preeminent financial centre.

We also had new quarterly GDP figures which showed that our economy was recovering over the Summer, but started to slow going into Autumn. The steps we’ve had to take since to halt the spread of the virus mean growth has likely slowed further since then.

My economic priority continues to be jobs – that’s why we extended furlough through to March and I also welcomed news this week that nearly 20,000 new roles for young people have been created through our Kickstart scheme.

This week we hailed the start of a new chapter for UK financial services. In my statement to the House I set out our aim to bolster the dynamism, openness and competitiveness of the sector.

In particular we announced plans to:

Read more about the announcements via the link below.

Stat of the Week

19,672 job placements for unemployed young people have so far been created under our £2 billion Kickstart Scheme. This is a great start with with tens of thousands more expected in the months ahead and enough funding for 250,000 roles overall.

Please be sure to promote the scheme with businesses and potential gateways so we can help as many young people as possible.

One to Watch
L Day

This week saw the return of the Treasury version of Glastonbury, L Day. As part of this we introduced new measures to tackle promoters of tax avoidance and extended a £1 million tax break to stimulate investment in UK manufacturing and support business confidence

We also published draft tax legislation on a range of measures including the Plastic Packaging Tax. As originally announced at Budget 2018, this tax will be £200 per tonne for plastic packaging that contains less than 30% recycled plastic and will come into effect from April 2022.

To catch up with all the L day measures click the link below.

This week the PM and I visited a Tesco distribution centre. Tesco’s participation in the government’s non-shielding vulnerable referral scheme has meant those most in need have access to priority delivery slots, with 164,000 already secured.

What's more, they have recently hired 16,000 people to support growth in online shopping and are taking 1,000 Kickstarters too. In the coming weeks and months I will be doubling down on our Plan for Jobs to protect, support and create as many jobs as possible as we continue to combat the effect of coronavirus.

Are you ready for the new rules for business with the EU?

The Department for Business, Energy and Industrial Strategy has sent out a reminder to businesses that we are near the end of the transition period and, from the 1st of January 2021, there will be new rules to follow.