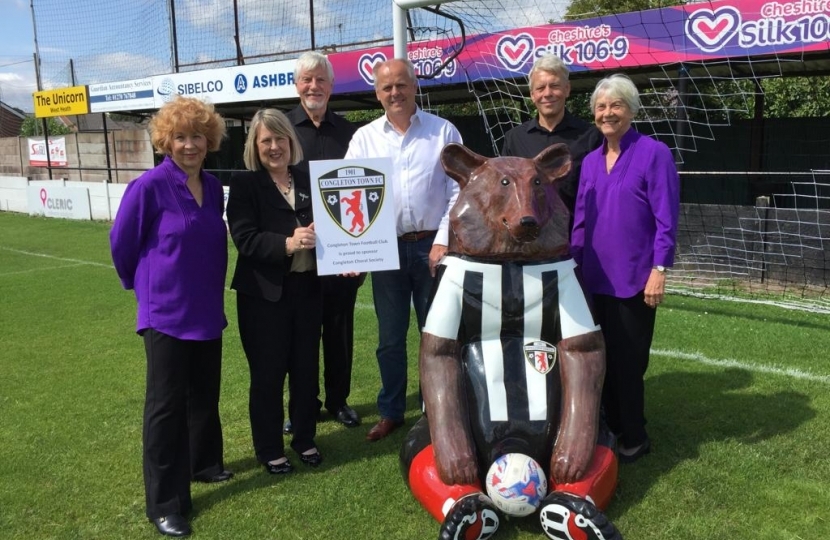 Three local clubs have netted a vital investment which fans will prize.

Among the supporters who are cheering is Congleton MP Fiona Bruce.

The money has been given by the Premier League’s Matchday Support Fund, are aimed to help the clubs cover the costs of adjustments that will need to be made to safely cater for the return of players and supporters to their stadia.

“When the Government is trying to help as many businesses as possible, it is pleasing to see money from the famous clubs being passed to the lower leagues.

“My own son used to play for Congleton Town F.C. so I have first-hand experience of the importance of these clubs to the local community, supporters and players. Every penny will help, especially in these difficult times.

“These clubs have ongoing costs and these grants will hopefully help them survive until better times return and they can return to playing their full role in the community.”

The Matchday Support Fund is being delivered by the Football Stadia Improvement Fund (FSIF) - the grant-giving body that provides Premier League funding to support ground improvements for clubs in the professional, women's and non-league games.

“Playing without spectators is a hollow experience for the players and the energy from the stands is always really appreciated. The club has had to incur significant costs in meeting the guidelines to ensure players and spectators remain safe and the costs will continue to be incurred as long as the outbreak continues.

“It has been a real boost to the club finances to be able to secure a Matchday Support Grant from The Football Stadium Improvement Fund. As a Step 5 club in the National League System this amounts to £4,000 and will go a long way towards mitigating the compliance costs. The club will continue to work hard to encourage supporters to visit the stadium and feel protected as much as possible whilst enjoying the weekly spectacle of watching the club’s first team and reserves throughout the season.”