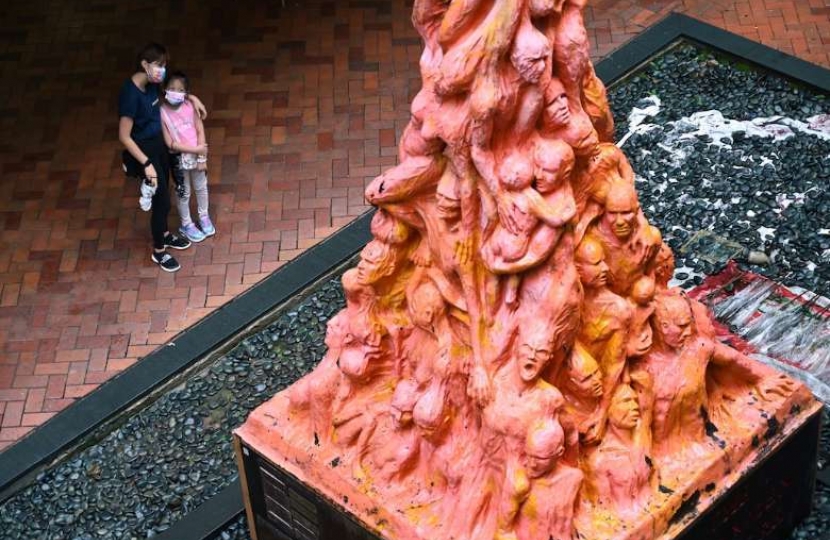 Benedict Rogers is the co-founder and chief executive of Hong Kong Watch, deputy chair of the Conservative Party Human Rights Commission, an adviser to the Inter-Parliamentary Alliance on China (IPAC) and an adviser to the Stop Uyghur Genocide Campaign. He has written the following article for UCA news.

"Exactly four years ago today, I was denied entry to the city that had once been my home, where I had begun my career as both a journalist and a human rights activist. I had lived in Hong Kong for the first five years after the handover, from 1997 to 2002, and left believing “one country, two systems” was working.

Indeed, in Hong Kong I had led campaigns for freedom for other struggles in Asia — demonstrations for East Timor, and church missions from Hong Kong to Timor-Leste in transition and refugees along the Thailand-Burmese border. So, for me, Hong Kong was a place from which I would fight for freedom for others in Asia. It didn’t occur to me that I would end up fighting for Hong Kong’s freedoms.

On Oct. 11, 2017, some 20 years after I first arrived in the city, I was turned back at Hong Kong’s Chek Lap Kok Airport and told, on the orders of the Chinese Communist Party regime, that I was unwelcome.

By comparison with everything that has happened in Hong Kong since, that incident is unimportant. But it symbolizes one of the early warning signs of Beijing’s intent, one of first indications that “one country, two systems” was under strain — a warning I wish the free world would have taken more seriously.

While there were other cases to follow — including Human Rights Watch’s executive director Ken Roth, US journalist Michael Yon and Japanese city councilor Kenichiro Wada, as well as the expulsion of the Financial Times’ Asia editor Victor Mallet — it is likely that I was the first foreigner, certainly Westerner, to be deported with such publicity.

He looked at me pleadingly. “Please, I am just doing my job, I can’t comment,” he replied.

“I know. And thank you for treating me well,” I said, for they had handled my deportation with typical Hong Kong courtesy.

But having been deported from Myanmar twice (I try not to make a habit of it), I couldn’t let the unreasonableness of the system go unchallenged, so I said: “This is a sad day. It’s sad for me personally, but even sadder in terms of what it represents for Hong Kong.”

With a little glistening hint of emotion in his eyes, my one remaining companion before boarding the plane — a Hong Kong immigration officer — replied: “Yes. It is a sad day.” The officials, I felt, did not enjoy deporting me but were just following orders.

Of course, since that day four years ago, that incident has paled into insignificance as Hong Kong’s freedoms and autonomy have been ripped to shreds.

Under the draconian national security law imposed by Beijing on Hong Kong with no local input on July 1 last year, former legislators, pollsters and campaigners have been arrested and jailed for daring to hold a primary election to choose the democracy camp’s candidates for Legislative Council elections; new regulations have been imposed that effectively exclude any democrat from contesting elections; district councilors have resigned and gone into exile, for fear of arrest for refusal to swear allegiance to the Chinese Communist Party; and the entire pro-democracy camp has been forced out of Hong Kong’s legislature.

Hong Kong is now under the total, absolute control of Xi Jinping’s regime, with all semblance of opposition — and autonomy — snuffed out.

The murder of Apple Daily — the one remaining Chinese-language, pro-democracy daily newspaper — broke my heart far more than my own denial of entry to Hong Kong. For over a year I wrote regularly for Apple Daily’s English language section. I filed my last piece as usual on June 16, the day before the police raid. It was never published, and the newspaper died a week later.

In recent months, the crackdown has intensified. Almost every day I receive news of arrests, the closure of civil society groups or some new repressive law. The assault on civil society is especially intense — with the disbanding in of one of the largest civil society groups, the Civil Human Rights Front, the biggest teaching union, the Professional Teachers’ Union, and the closure of the 612 Humanitarian Relief Fund — as well as the silencing of the speech therapists who wrote children’s stories about sheep and wolves. It just illustrates the absurd insecurities of the Chinese regime and their ridiculous Hong Kong quislings.

The repression of Denise Ho by the Hong Kong Arts Centre, the closure of Bleak House Books, the departure of Steve Vines after 35 years — these all symbolize the closure of Hong Kong.

Over the past year or more, most of my friends in Hong Kong have ended up either in prison, on trial, awaiting trial, keeping their heads down or in exile. That’s the tragic transformation of Hong Kong — from Asia’s world city and one of its most open societies to a place of fear and repression.

Four years after my denial of entry into Hong Kong, my heart is more broken than ever about the city I love — and yet it’s more determined than ever to support the fight to free that great city where I started out in life.

I know I’ll never be able to visit Hong Kong — or China — again until there is a change of regime in Beijing. That’s why I am more determined than ever to fight for such a change."

* Benedict Rogers is the co-founder and chief executive of Hong Kong Watch, deputy chair of the Conservative Party Human Rights Commission, an adviser to the Inter-Parliamentary Alliance on China (IPAC) and an adviser to the Stop Uyghur Genocide Campaign.