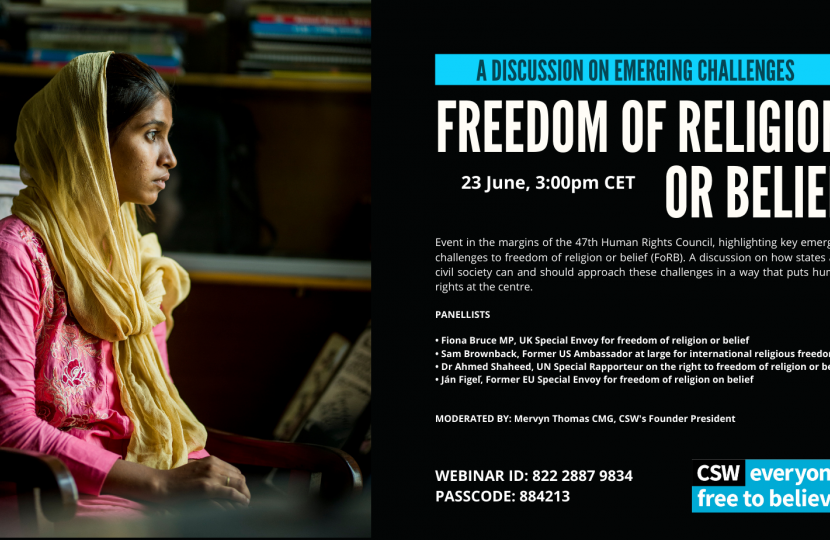 This week Fiona spoke at a United Nations Human Rights Council side event hosted by Christian Solidarity Worldwide. The event focused on Emerging Challenges to Freedom of Religion or Belief  allowing for discussion on how states and civil society can and should approach these challenges in a way that puts human rights at the centre.

Speaking after the event Fiona said,

"It was a privilege to speak alongside such authoritative co-panellists on this increasingly globally concerning issue which affects millions of people in their daily lives, and as I said in my speech, often some of the world's poorest individuals and communities whose plight has been exacerbated by Covid-19.

With panellists speaking from several countries this underlined the importance of us working together to challenge FoRB abuses and develop ways to continue promoting and protecting freedom of religion or belief for all."

Fiona's full speech from the event can be found below.

Good afternoon. Thank you Mervyn Thomas and Christian Solidarity Worldwide for inviting me to join this panel – on which to be frank I feel something of an interloper, bearing in mind the extensive experience on freedom of religion or belief of my fellow panellists – as you’ve already heard – and you still have former Ambassador Sam Brownback to come!

I want to spend the next few minutes focusing on the particularly distressing impact of living in the shadows of Covid-19 as experienced by people who already live in poverty and are marginalised because of their religion or beliefs; of the acute challenges many of them have faced during this pandemic, and to suggest some ways in which help could be provided to address those challenges – and in some instances where this is already being provided by the UK.

Fortunately, in speaking to you today I am able to draw on authoritative research recently carried out by CREID, the Coalition for Religious Equality and Inclusive Development, and commissioned by the UK Foreign, Commonwealth and Development Office, on the challenges during the pandemic on such religious minorities living in West Africa and South Asia.

This CREID research demonstrates how religious inequalities intersect with other inequalities of power – historical, structural, and socially determined characteristics such as class, ethnicity, caste, gender and age, to exacerbate how some of the poorest people, and therefore least resilient in crisis, have had to endure the Covid-19 pandemic –

of the loss of subsistence livelihoods for the most marginalised – farmers unable to take perishable goods to markets because of travel restrictions; women unable to sell milk due to market closures; or of domestic or street workers shut out of their jobs due to lockdowns –

how the scapegoating of Muslims accused of being Covid-19 spreaders, sometimes even involving harassment and beatings, has made them fearful of leaving home and consequently lost them their jobs; and of how they are reluctant to report such discrimination to authorities for fear of reprisals –

of how Christian families who have had to leave their homes and farms during the pandemic then face living in overcrowded conditions where health and hygiene challenges and fear of infection are severely heightened during a pandemic.

The report speaks of how for many the loss of their religious community-based support – sometimes their only social safety net - such as through Hindu temples, due to their closure in the pandemic, has exacerbated the economic impact of Covid-19.

So too has the fact that in some countries religious identity shapes the level of government assistance available, and even where this may be available for religious minorities, fear, of harassment or attack,  can act as a deterrent to them from accessing necessary services to stay healthy through the pandemic.

A key impact of living in the shadows of Covid-19 has been on the mental health of people – and particularly devastatingly so for the already poor and marginalised, described in the CREID report as living constantly filled with fear, anxiety and insecurity, suffering distress, depression and despair due to hunger and loss of breadwinners and livelihoods; worrying about feeding their children or about debt; exhausted by targeting, ostracization or fear of Covid-19 infection; at greater risk of domestic or other violence; with limited if any access to health services or social support.

We hear concerningly of the widespread loss of schooling for marginalised children meaning that the impact of Covid-19 will be felt by this generation not only today but potentially for years to come. The CREID report notes particularly that the impact of the pandemic going forward may mean where resources for schooling are scarce, boys’ education could be prioritised over that of girls’.

In the face of such challenges, what help can be offered; what solutions can be suggested; and what contribution can the UK make towards these?

Educating girls is one of the best investments we can make to help lift people out of poverty, so the UK is helping many more girls into school in a number of places, including Nigeria, as well as investing to assist women in developing countries build resilient businesses. And the UK Government is ensuring that our human rights work addresses specific issues such as gender-based violence experienced by women from religious minority communities.

Critically too, equitable access to vaccines across the world will help ensure no one is left behind after this pandemic which is why the UK has provided over half a billion pounds to a global vaccines programme which has now delivered more than 87 million doses across six continents.

Multilateralism - working together as nations – is key to addressing the effects of this pandemic, including on the FoRB marginalised, which is why I welcome last week’s G7 Open Societies Leader’s Statement committing countries to work together to promote FoRB, and the joint statement to the same effect by Prime Minister Boris Johnson and President Biden in the New Atlantic Treaty, as well as the commitment by G7 Foreign Ministers to coordinate action and target support on defending FoRB going forward.

It is, too, why I am pleased, as the Prime Minister’s Special Envoy for Freedom of Religion or Belief to be the UK representative on the Alliance of 33 nations, the International Religious Freedom or Belief Alliance – founded by former Ambassador Sam Brownback – which responded proactively with a joint statement to protect the right to FoRB during the pandemic.

Why is this so important – and not just during a pandemic?

Because an individual’s faith or beliefs lie at the very essence of their being.

They are what make us human.

So, to discriminate against, to persecute, or to attack another person on account of their religion or beliefs is to strike at the very core of their humanity.

And whilst the CREID report speaks of groups, such groups are of course made up of individuals, of men, women, and children, each one, like all of us here today, with individual hopes and aspirations.

For me, the heart of defending FoRB is based on respecting the unique worth of every human being.

It is about the importance of treating every individual with dignity.

It is about saying “you matter, you have purpose, you are significant, wherever you are in the world, whatever your faith or none, you are not forgotten, you are not disregarded, you are not overlooked.”