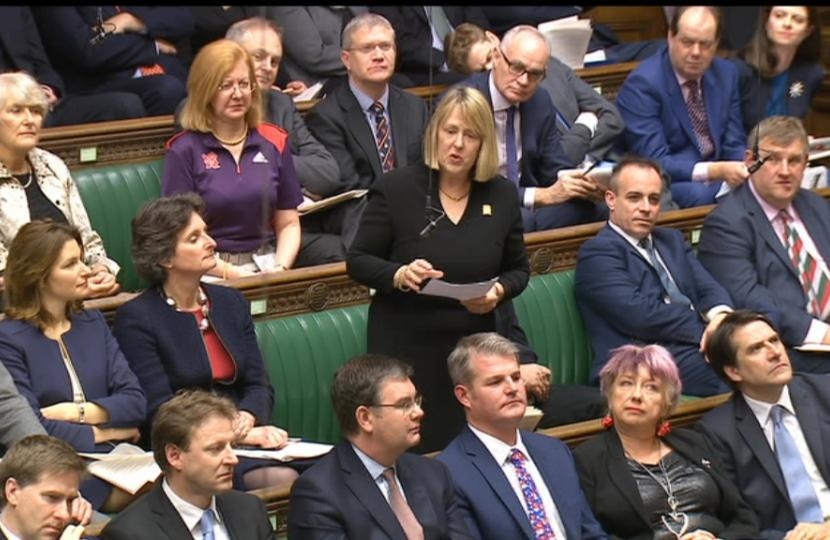 Speaking in a debate in the House of Commons on tackling anti-Semitism Fiona said:

“I am sure that I represent all Members of this House in saying that the Jewish community is and has been a real blessing to our nation throughout its history; both inside and outside this House, Jewish individuals have contributed in extraordinary ways to the culture and prosperity we all share. We should take this opportunity to honour and thank their community for the contribution they make to our common good. In recognising and celebrating the Jewish community, we should condemn unequivocally all antisemitic behaviour suffered by our Jewish brothers and sisters. One antisemite is one too many, and there is much work to be done to tackle this.

Today, I wish to focus on the responses to the problem. An effect response will flow partly from the following two principles. First, we must do all we can through education to understand and accept our differences, and in this context our religious differences in particular. Although respect for freedom of religion and belief should not give special privileges to the religious, it should allow believers like our Jewish brothers and sisters the maximum possible freedom to live out and profess publicly who they are and what they believe. Secondly, we must re-emphasise the things that bind us all together, whatever our background or beliefs, and first and foremost that means our innate value as individual human beings—our shared humanity.

Before I touch on those principles in a little more detail, let me just say that true tolerance cannot just be of religions or practices with which we agree; it must also be of those who may be quite different from ourselves. Neither is true tolerance best fostered by state-established measures of what is good for all; rather, it is fostered by enabling those who are different to exist ​freely and together with those differences. One way to promote that is to facilitate better religious education in schools.

As chair of the all-party group on religious education, I am aware of the number of highly dedicated RE teachers throughout the country, yet as our report “Improving Religious Literacy: A Contribution to the Debate” highlighted, over recent years RE has not been given the priority or resources that it should have had in many schools. I am pleased that Education Ministers are now seeking to address this, because for many children today RE serves as the main or sole space in which they encounter and discuss different religious beliefs, values and meaning.

Poor-quality RE can have a lasting detrimental effect on the extent of children’s ability to understand and engage with those of different faiths. In turn, that can affect their ability throughout life to engage intelligently and positively in an increasingly diverse society. A submission to the all-party group from the University of Chester department of theology and religious studies said:

“Religious literacy enables willingness and ability to live with religious and cultural tensions and with conflicting beliefs and practices. It supports social cohesion by providing spaces where different views can be aired, listened to and engaged with without the pressure to conform to an overall perspective.”

Good religious education will help to promote community cohesion, which is critical as the shape of our communities changes. I am pleased that the Secretary of State for Education appreciates that, too. He noted recently:

“It is mandatory for all state funded schools to teach RE and it is important that they do this well. Good quality religious education not only helps schools meet their legal duty to promote children and young people’s spiritual and moral development. It also gives them knowledge of the values and traditions of Britain and other countries, and so fosters mutual respect and tolerance of those with different faiths and beliefs.”

Lord Alton said in the other place:

“Religious literacy and understanding of faith and no faith, the honouring of difference, the determination to understand one another and to reconsider bigotry, prejudice and caricatures, must surely be at the heart of how we form tomorrow’s citizens.”—[Official Report, House of Lords, 17 December 2018; Vol. 794, c. GC158.]

We can promote true tolerance by reasserting the rights and respect owed to each person simply by virtue of their humanity. These rights, as intended in the universal declaration of human rights, assume that we all have equality by virtue of our humanity.

I was speaking about the importance of our individual humanity, which we should respect before any differences in intelligence, strength, religion, ability or political views. We should understand that each of us is individually and uniquely created, and that no insignificant person has ever or will ever be born. It is this vision of dignity in our shared humanity that was lost during the holocaust.

My favourite teacher at school—I know we all had one—was a German who had, with her father, helped Jewish children escape from the Nazis. They then had to escape themselves. She taught me German, but she also taught me something far more important than that. She taught me that no ideology should take precedence over respect for an individual as a human being and as a person.

I note that we subtly enable persecution every time we promote the use of language that often accompanies identity politics. Our political opponents are not necessarily wicked. They are certainly not scum. They are due a respectable ear and proper dialogue. Those who differ from us, whether in their political or religious views, or in their ethnicity, are first and foremost our brothers and sisters in humanity. I know that our Jewish brothers and sisters teach and promote these principles. As a society, let us stand alongside them and do all we can to enable them to flourish in their unique identity and beliefs.”