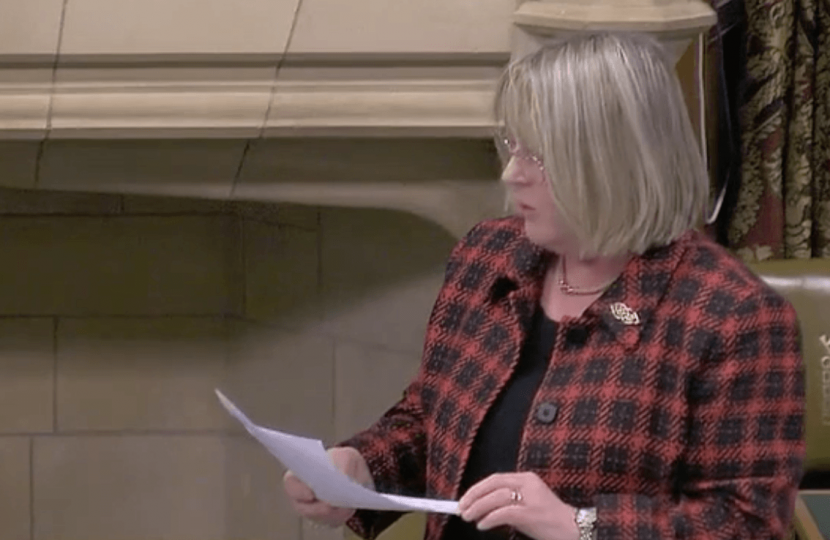 "Dads are good for lads—I know, because I have two boys—if only because they can share the interest of football. More seriously, it is true that fathers are good for sons in many ways. Anything we can do to support that relationship—and by we I mean the Government—we should do. I echo the respect expressed by others, which I share, for the herculean task that single parents—most frequently, mums—do to bring up their children. Where we can, we need to look at how we can strengthen family relationships in a society where, today, over a quarter of children live with mum but not dad. More than one in seven are born into homes where there is no dad present.

The implications of that are serious; I will share a couple of sad statistics. The lack of a good male role model in young men’s lives is helping to lure them into substitute families: gangs. Apparently, most of the 50,000 or so young people caught up in county lines activities have come from homes where there has been no good male role model. Similarly, 60% of the sons of men in prison are likely to end up in prison, too. That statistic is even worse if both the father and a brother are in prison—it is then a 90% likelihood.

Those are staggering statistics that show why it is so important that we and the Government try to support families more. That support is positive for children and for the wider community."

"I hope that later on in her speech my hon. Friend will refer to “A Manifesto to Strengthen Families”, which I believe has been endorsed by more than 60 MPs and has been available to Government for over a year now. It would be good to see some of its policies championed by Government."

"My hon. Friend makes an excellent point and I will indeed refer to it.

My hon. Friend the Member for Chatham and Aylesford (Tracey Crouch), who introduced the debate so well, referred to a CSJ report from this year. Another CSJ report, “Every Family Matters”, which was produced as long ago as July 2009, said very similar things, such as the importance of strengthening families and of having a good, strong input into a child’s life. Yet I have here an interesting statistic: 43% of unmarried parents split up before a child’s fifth birthday, but only 8% of married parents do. That is an interesting factor for us to consider: if we are looking at strengthening family life, we should not forget that supporting marriage is part of that.

Sadly, the UK has one of the highest rates of family breakdown among the 30 OECD countries. Just two-thirds of children aged nought to 14 live with both parents. In the OECD countries overall, 84% of children of those ages live with both parents. Very interesting work is being done on the link between those factors and British productivity, which is 18% below the OECD average."

"I admire my hon. Friend’s determination to promote marriage, but I must give a plug for my private Member’s Bill on civil partnerships, which, if it passes through the Lords, will make civil partnerships available for opposite sex couples by the end of this year. They would be an additional incentive for those couples to stay together, as overseas statistics show, particularly for the good of the children."

"It is so important that we do what we can. In the very short time that I have left, I will touch on some of the practical policies in “A Manifesto to Strengthen Families”, which over 60 Members of Parliament support, and express a degree of frustration that the Government have not taken them up more practically. I know that individual Cabinet Ministers are very interested, but in order to see some real progress we need a senior Cabinet-level Minister who is responsible for drawing together the manifesto’s several policies.

I will touch on some of the manifesto’s policies on fathers. Policies 8, 9 and 11 talk about promoting the importance of active fatherhood in a child’s life. Policy 8 says: “Maternity services should maximise opportunities to draw fathers-to-be in early.”

Policy 9 proposes that, where appropriate, “The Government should…require all fathers to be included on birth certificates.”

Policy 11 proposes that “high quality marriage preparation” should be available at a cost-effective rate for young people thinking of getting married.

Finally, one of our key policies is the promotion of family hubs. As we have heard, children’s centres are not always as effective as they need to be. Families need support bringing up children, not just aged nought to five, but nought to 19. In the teenage years particularly, the input by fathers into their sons’ lives is often critical. We believe that it would be really positive to have family hubs in each local community, to support families at every stage of a child’s development.

I am disappointed that the Government have not taken that up more strongly. We shall continue to persevere and to press them to do so. The good news is that many local authorities have taken up those ideas very strongly and family hubs are springing up across the country. I invite colleagues to a family hubs fair, which will take place on 14 February. It is convened by Westminster City Council, which is setting up its own family hubs. The fair will flagship best practice from local authorities across the country that have set up family hubs, specifically to show how we can best support families with children. I am sure that there will be many examples of how we can best support fathers to engage in their sons’ lives, which is such an important thing on which we need to focus."