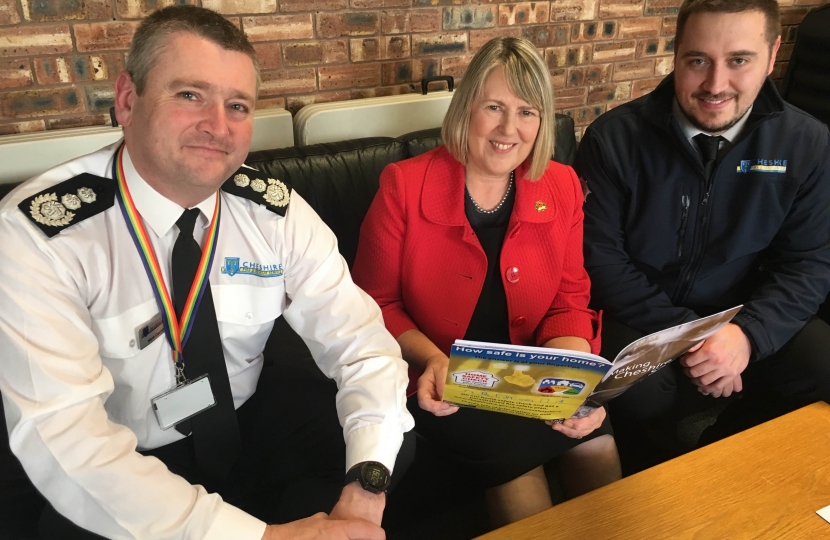 Fiona Bruce MP met with Chief Fire Officer and Chief Executive of Cheshire Fire and Rescue Service to hear about the Fire Authority’s “planning for a safer Cheshire”.

“I was tremendously encouraged to hear that following the success of the new fire station in Alsager which is so well used by community groups all four fire stations in Congleton, Sandbach, Middlewich and Holmes Chapel will be renovated over the next 3-4 years. It was also good to hear that continuous improvements across the area mean that call out times have been improved with 87% of attendances to incidents by fire officers now arriving in under ten minutes. Similarly, the success of Cheshire Fire Authority’s prevention strategy over many years now has reduced the need for call outs by 50%.”

“We are well known for our innovative approach to reducing the risks facing out residents and businesses and I want to put on record my 100% commitment to further improving the safety and wellbeing of the communities we serve.”

Fiona heard about the voluntary work of fire cadets supported by the Authority which has involved 5 schools in Ghana and 4 schools in Nepal being built over recent years with Cheshire Fire Cadets raising funding for these and to cover the costs of their own trips out there.

“I was also very interested to hear of the opportunity for young people to visit the new fire safety centre at Lymm and would encourage all schools to take up the opportunity of a fascinating day out for pupils which can be arranged by contacting Lymm Fire Safety Centre or going on the Fire Authority’s website www.cheshirefire.gov.uk.”