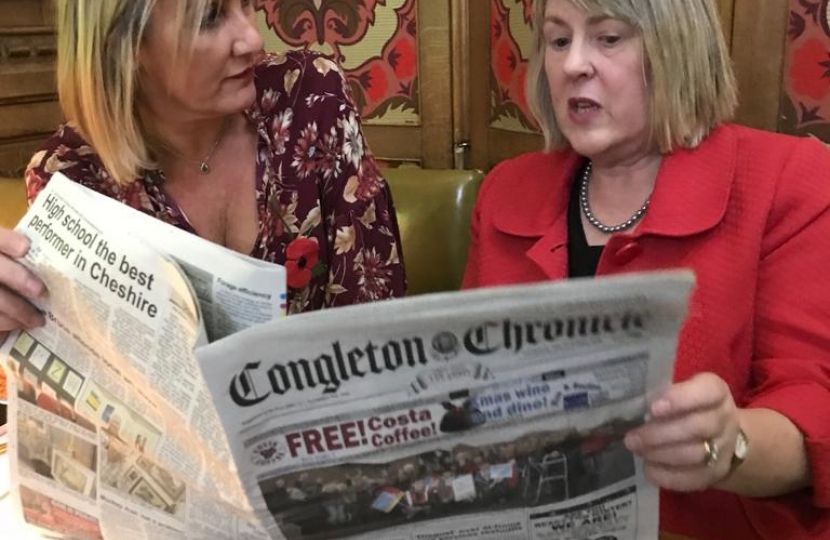 When she attended the recent demonstration outside Congleton War Memorial to save the Hospital’s Minor Injuries Unit Fiona undertook to take local people’s concerns down to Westminster.

“I conveyed to the Minister the grave concerns that local people have about the threatened loss of the Minor Injuries Unit and the fact that the campaign to stop this reaches right across the Congleton community and even to outlying villages. I explained in particular that potentially travelling to Leighton or Macclesfield Hospitals, a considerable distance, was unacceptable and that the current closure times of the Unit were equally so.”

The Minister was told of the history of the Hospital and how it was built by and for the local community and that if the Government is committed to not downgrading smaller hospitals then Congleton as a growing town should be respected as such.

“The Minister was interested to see the report in the Congleton Chronicle of the demonstration and the extent of local concern – which includes not only myself as local MP but also the strong support of Rachel Bailey, Leader of Cheshire East Council, following the demonstration.”

“The Government has recognised that more funding is needed to keep pace with growing pressures on the NHS and so has announced that NHS funding will grow on average by 3.4% in real terms through to 2023/24. This will provide NHS England with over £20billion more in real terms for its annual budgets – and rightly so, as the NHS is a most cherished public service. It is my view that ensuring that local hospitals, like Congleton War Memorial Hospital with its frontline Minor Injuries Unit (reducing, as it does, pressure on A&E services elsewhere) should be a priority for NHS funding, if we are to honour the long time commitment of successive governments that the NHS provides healthcare for those who need it, free at the point of use, regardless of background or income.”