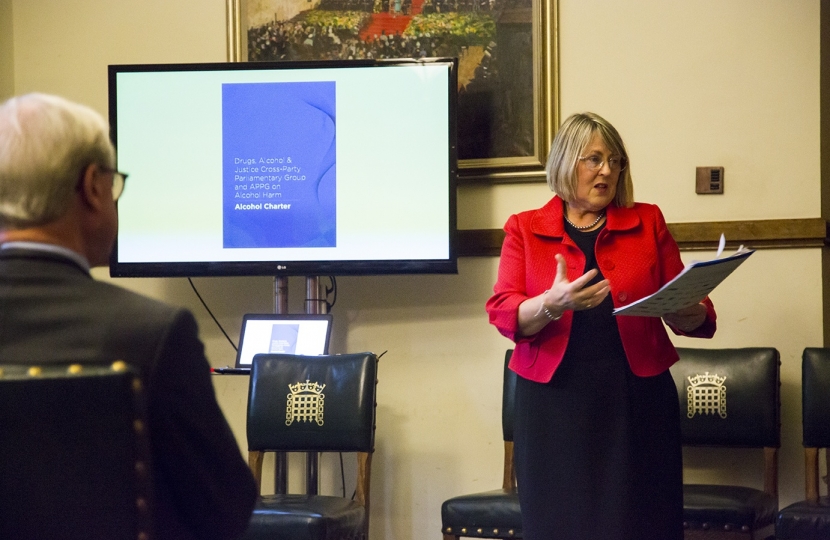 As Chair of the All Party Parliamentary Group on Alcohol Harm, Fiona has launched a new charter calling on the Government to take several steps to help reduce the impact of dependent or irresponsible drinking.

“There is no one single silver bullet which will help reduce the damage which harmful drinking causes – not only in terms of health damage but also in fractured families and crime. There are 1 million drink related hospital admissions every year – 17% higher than a decade ago; 4% of the population drink around 30% of the alcohol and tragically it is the leading cause of death for 15-49 year olds.

This Charter which has been prepared to influence the Government’s forthcoming alcohol strategy therefore has a wide range of practical proposals to help people make fully informed decisions about drinking and improve support for both dependent and non-dependent drinkers.

Key proposals include introducing minimum unit pricing in England, which I have backed up by bringing forward a Private Member’s Bill last week in the House of Commons. Other suggestions for Government include reducing the drink driving limit to 50mg/100ml in line with most of the rest of Europe, improving labelling on alcohol products and introducing a 1% treatment levy on alcohol duties to generate £100million for alcohol treatment services including early alcohol intervention provision and advice, guidance and help for families, carers and children affected by parental alcohol misuse – 200,000 young people are the children of dependent drinkers. Families need more help and they need it earlier.”