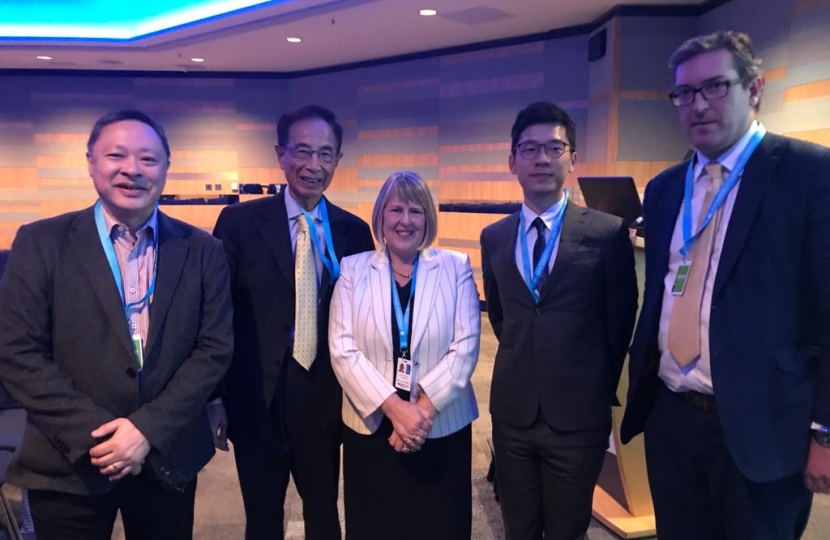 On Sunday, Fiona chaired a panel on "The erosion of freedom, the rule of law and autonomy in Hong Kong" at a Fringe Event of the Conservative Party Conference as the Chair of the Conservative Party Human Rights Commission. The panel included: Benedict Rogers, Founder of Hong Kong Watch; Martin Lee, founder of the Democratic party of Hong Kong; Benny Tai, legal scholar and democracy activist; and Nathan Law, Hong Kong’s youngest elected legislator and a leader in the Umbrella movement.

The speakers gave several moving speeches. During the question time towards the end of the meeting a woman stood up and inexplicably started shouting to the effect that the meeting should not be held. As she would not stop shouting someone went over to her, presumably to try to quieten her, and she hit him. Security was called and she was required to leave the meeting, and the conference, and was reportedly taken into police custody. The meeting then continued.

"It is vital that such incidents do not prevent brave people like those who came to speak at our meeting - even at risk of imprisonment in their own country - from speaking out, nor stop those of us who seek to support them in a modest way - even though their daily lives may seem far removed from our own."

"Why should we be concerned about attacks on Free Speech and other Human Rights in Hong Kong? Why should we here? Because as Martin Luther King Jr. said from the US Birmingham Jail: “Injustice anywhere is a threat to justice everywhere. We are caught in an inescapable network of mutuality, tied in a single garment of destiny. Whatever affects one directly, affects all indirectly.” For further reference, see also my article published on the ConservativeHome website on 28th September https://www.conservativehome.com/platform/2018/09/fiona-bruce-join-me-a… "

You can read about the event in the Guardian: https://www.theguardian.com/uk-news/2018/oct/01/conservative-tory-confe…