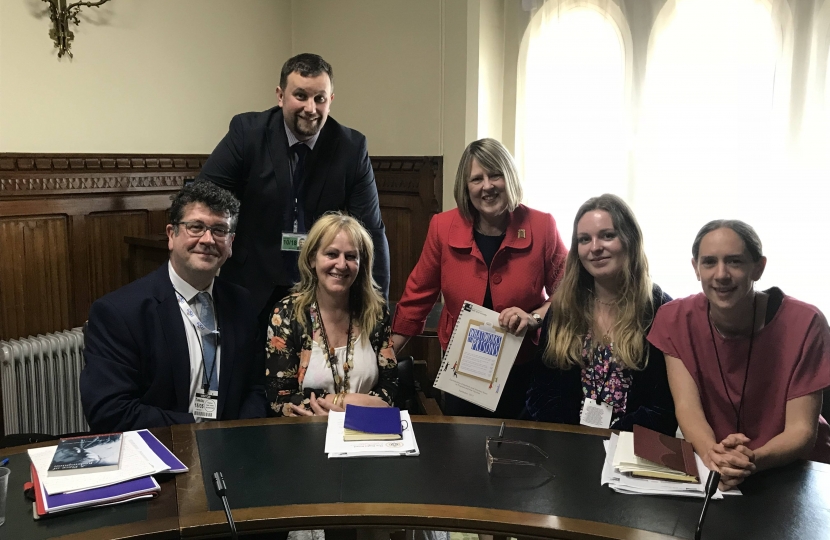 Fiona chaired a meeting of the All-Party Parliamentary Group on Faith and Society in Parliament looking at ‘What Works in Prisons – contributions of the Faith and Voluntary Sector to Prisoners and their Families’.

‘It was a privilege to chair a meeting of the All-Party Parliamentary Group on Faith and Society (APPG) – which works to highlight good practice in the work of faith organisations in our society. We looked at ‘What Works in Prisons – contributions of the Faith and Voluntary Sector to Prisoners and their Families’.

At the meeting there were a number of powerful contributions, including from former Attorney General the Rt Hon Dominic Grieve MP, who highlighted the need to role-out sustainably best practice across the prison estate, in terms of supporting prisoners’ rehabilitation.

Daniel Singleton of FaithAction presented on the report ‘What Works in Prisons’, produced for the All-Party Group (see www.faithaction.net) and raised the importance of the Prison Governors being supportive of the work voluntary organisations do in their prisons, particularly as Governors are given more autonomy. Hazel Alcraft, a leader at Clinks, which supports and advocates for the voluntary sector in prisons, spoke of the need for prison authorities to see the voluntary sector and faith organisations as a key strategic partner in promoting rehabilitation.

Paula Harriot spoke very powerfully of the unique offer that faith organisations can bring in an environment where there is often no individual personal support available from prison staff; volunteers from faith organisations provide a one-to-one listening ear, in a non-judgemental supportive way which gives prisoners hope and help to move forward. Andy Keene-Downs, CEO of PACT, which is a Catholic prisoners aid society founded in 1898, also spoke of the importance of faith-based organisations, not least because they have ‘staying power’ in the criminal justice system when there has over recent years been much change. He said:

“We need to believe in the redeemability of people – that every person is capable of redemption, not necessarily in a religious way, but meaning that they accept the harm they’ve done, repent of it, and move on with fresh hope.”

“At the end of the meeting, it was agreed that Parliamentary members of the APPG should consider taking back to Ministers a number of practical points, such as: the need for sustainability of voluntary projects in prisons to be facilitated, rather than inhibited, due to lack of support or funding; for vetting of prison visitors to be less cumbersome; for better support for the children of prisoners; and for an improvement of faith literacy for those working in the justice system. Finally, it was made clear that while the recommendations in the recent Farmer Review to strengthen prisoners’ family ties have been strongly supported by Ministers, without funding to support these it will be very difficult for providers on the ground to implement these effectively.’