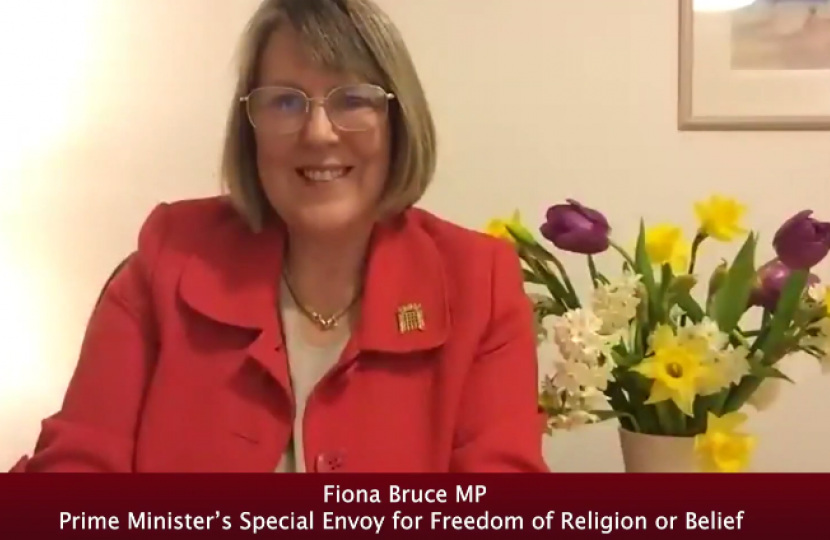 Fiona's speech at the Contemporary Martyr's Day webinar can be read in full below and accessed here in video format.

"Good evening, it is a privilege to follow such eminent champions of freedom of religion or belief.

And it is therefore in a spirit of humility that I speak as the Prime Minister’s Special Envoy for Freedom of Religion or Belief to commemorate those who have been martyred and to affirm freedom of religion or belief as a fundamental right of every human being.

A right to which the Prime Minister himself is resolutely committed.

As he has said in the House of Commons “We all know that wherever freedom of belief is under attack, other human rights are under attack as well. We will continue to work closely with like-minded partners to stand up for members of such marginalised communities”

Yet sadly as we have heard today we see around the world growing evidence of the denial of freedom of religion or belief, or FoRB for short, being threatened or entirely denied, with discrimination, violence and persecution of religious minorities rising; with an estimated 83% of the world’s population living in affected countries; affected either as a result of laws, policies or actions by state officials or alternatively affected by social hostility including violence or harassment by individuals, organisations or groups, and this tragically exacerbated during the Covid pandemic with actions such as blaming, scapegoating and discrimination against people of faith in the distribution of food, aid and healthcare.

Yet may I encourage you?

There is today also growing international awareness of such violations and increasing advocacy on behalf of victims of persecution.

And the UK is showing itself to be a global leader on this, protecting and promoting freedom of religion or belief is a key human rights priority for our Government.

Religious leaders from around the world recently joined the UK Government’s initiative led by Lord Ahmad, our Human Rights Minister, on the Declaration of Humanity by leaders of faith and leaders of belief. Working together to dismantle harmful interpretations of faith or belief as a justification of sexual violence.

And last year the UK was just one of a handful of founding member countries which formed an organisation called the International Religious Freedom or Belief Alliance – or the Alliance for short.

Our purpose – and I am privileged to be the UK’s representative on the Alliance – is to work together, to fight for the rights of people worldwide who are discriminated against or persecuted for their faith or belief. In less than a year the Alliance now has no less than 32 member countries and growing still.

And as part of its work has helped secure the release from prison of worshippers in Eritrea and prisoners of conscience in Yemen.

As the Alliance has stated to the UN Human Rights Council, we “strive for a world where respect for other people's religion and spirituality can contribute to the promotion of the inherent dignity and worth of all.”

That for me goes to the very heart of why those of us concerned about this issue should work on FoRB for all.

For me it is about recognising that every man, woman and child has been individually created by God – as we read in Psalm 139 “fearfully and wonderfully made.”

Persecution does the opposite – it dehumanises people. It treats people as less than human.

One way we can properly commemorate martyrs is to look at how best we can prevent acts of violence based on religion or belief.

That is why I am pleased to confirm that good progress is being made on Recommendation 11 of the Truro Review, a Review which as Envoy I am mandated to oversee the implementation of, progress towards rolling out religious literacy e-learning materials not only to all Foreign and Development Office staff but also to staff in other government departments more widely.

We need to develop education-based approaches to promote respect for FoRB for all, to promote cultures of non-violent conflict resolution and of respect for human difference, and not just in schools.  At the most local level, across the world, to help communities flourish and live in peace we need to counter early ideas and narratives that attempt to justify exclusion and discrimination which can lead in turn to hate-based violence.

That is why it is critical for me as Envoy, to work not only at an international level but also to work with local civil society and faith leaders.

Working together we all have key parts to play in combatting breaches of FoRB and helping combat these in the future, which is why today’s event, recognising this, is significant.

We need to recognise this as a generational goal. To help inspire young people to understand that recognising the inherent dignity of every human being is at the heart of protecting human rights and fundamental freedoms, including freedom of religion or belief. And that this is essential to enable us to live in stable, flourishing communities.

We cannot neglect this or leave it for later. The time to shape future generations for good is now.

That would truly honour the memory of martyrs.

May I close with words from Pastor Richard Wurmbrand who witnessed and experienced horrific persecution as a prisoner of conscience in the second half of the last century and who testified of this before a US Senate Committee.

Fiona calls for a debate on the Declaration of Humanity