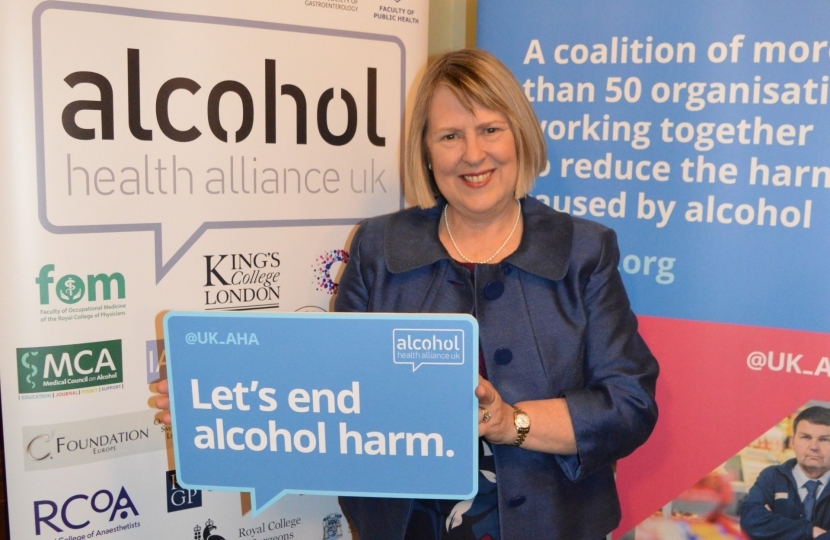 Fiona questioned the Leader of the House, Jacob Rees-Mogg MP, in the House of Commons yesterday (4th February), asking him:

“Reports this week show a concerning rise in alcohol harm during the pandemic, including in death rates due to increased alcohol consumption.

"To help the many families sadly affected by this, can we have a debate on the need for sufficient addiction recovery programmes across the country to be available, on the benefits of reforming the alcohol duty system, and on the need for a revised Government alcohol strategy?”

This is an issue which Fiona, Chair of the All-Party Parliamentary Group on Recovery from Addiction, has challenged the Government on over many years.

The latest national figures, published this week, show that the number of alcohol-related deaths in England and Wales jumped to a record in the first nine months of last year.

The Office for National Statistics indicated that there were 5,460 deaths caused by alcohol misuse between January and September, a 16% leap from the same period in 2019.

"The Government share the concerns about reports of increases in alcohol-related deaths and we are monitoring the situation closely.

"This is a cross-cutting issue affecting several Government Departments, and there is a strong programme of work under way to address alcohol-related health harms and impacts on life chances, including an ambitious programme establishing specialist alcohol care teams in hospitals, and to support the children of alcohol-dependent parents.

“The Government have committed to publish a new UK-wide cross-Government addiction strategy. This strategy will be informed by Dame Carol Black’s continuing review of drugs, part 2 of which focuses on prevention, treatment and recovery.”

In addition, the MP heard that the Government is providing £23 million this year for substance misuse treatment and recovery services for rough sleepers.

“This is a matter of great interest because too many families are blighted by the effects of harmful drinking without the help they need; I am hopeful that as a result of this week’s concerning statistics the Government will take action to address this with more urgency.”