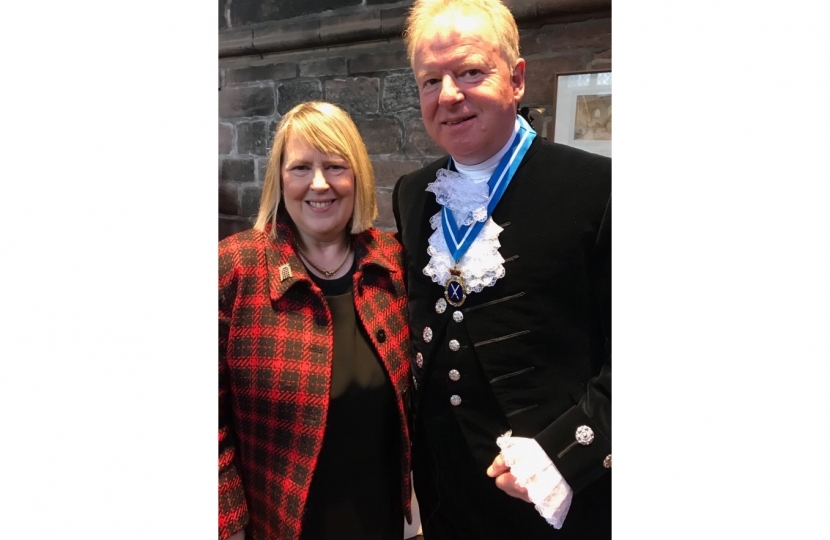 Fiona took part in the Declaration of Office of Mark Mitchell, a Deputy Lord Lieutenant of Cheshire, to his new post as High Sheriff of Cheshire on 12th April. The ceremony took place at Chester Cathedral and in addition to Fiona's involvement in the ceremony as both MP for Congleton and a Lay Canon of Chester Cathedral, also involved was Joelle Warren, of Alsager, Vice Lord Lieutenant of Cheshire.  Both Fiona and Joelle were asked to say prayers of committal with Mark for his year of office.

Mark Mitchell is founder of the Mitchell Group Motor business based at Cheshire Oaks; the company now employs over 100 people and Mark has a particular passion for customer service. Mark, who is married to Anita with two grown up sons, was appointed as a Deputy Lord Lieutenant of Cheshire in 2015 since when he has immersed himself in many aspects of Cheshire life and a diverse range of the counties charities including Street Pastors and Christians Against Poverty debt counselling; he is also a Director at Chester Cathedral.

During the ceremony Fiona said:

“Mark has a unique talent for making everyone he meets feel special and I am confident that during his year of office he will use this talent to great effect and for the benefit of the thousands of people he will meet and encourage, particularly across the voluntary sector in the county.”

“I am immensely enthusiastic about the year ahead as High Sheriff and looking forward to exploring and getting to know parts of Cheshire I am yet to visit.”