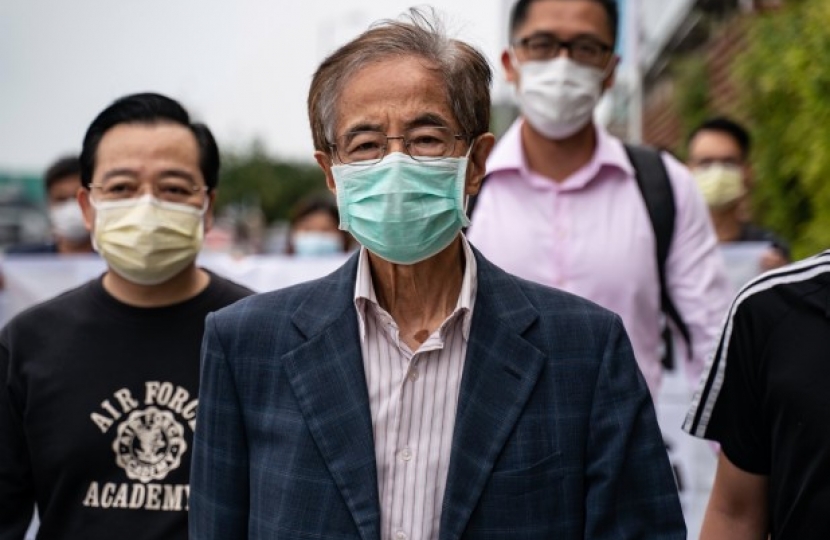 Writing in the New York Post, Benedict Rogers, Chair of Hong Kong Watch and Vice Chair of the Conservative Party Human Rights Commission, of which Fiona is Chair, wrote:

On Saturday, Hong Kong ­authorities arrested Martin Lee, one of the territory’s most senior barristers and the grandfather of its pro-democracy movement. The decision to round up the 81-year-old Lee, along with a dozen other prominent pro-democracy politicians and activists on bogus charges, represents an all-out assault against what little remains of Hong Kong’s rule of law.

Beijing has been tightening the screws on Hong Kong’s freedoms and autonomy over the past six years. During that time, we have seen the disappearance of anti-regime booksellers, the disqualification of pro-democracy legislators, pressure on academic and media freedom, a law criminalizing perceived insults to the ­national anthem, the expulsion of a growing number of foreign activists and journalists and the arrest and imprisonment of peaceful protesters.

The repression has escalated over the past year. In April, the government of Chief Executive Carrie Lam proposed a law that would have allowed the extradition to mainland China of Hong Kongers the Beijing regime ­accuses of criminal acts. That sparked sustained mass protests, with more than 2 million Hong Kongers pouring into the streets at the height of the movement.

Some protesters became more violent in frustration at a government that refused to listen and a police force that responded to words with rubber bullets and truncheons. While violence on the part of a few protesters is ­inexcusable, it is the indiscriminate and disproportionate brutality of the police that will leave a permanent scar on Hong Kong’s civic fabric.

Only when it was too late, when trust was completely broken, did Lam finally withdraw the extradition bill, and she still refuses to walk the path of reform.

Last November’s district-council elections saw the pro-democracy camp garnering a significant victory, sending a clear signal about the will of the people. Lam could have responded by initiating dialogue and reform. ­Instead, she gave jobs to defeated pro-Communist candidates and shut her ears to voters’ message.

Over the past week, Beijing has turned up the temperature alarmingly. The Communists are mounting pressure on the judiciary, according to senior judges, who worry that judicial independence is in a fight for survival. China’s Liaison Office in Hong Kong has also demanded a national-security law that would gravely endanger freedom of ­expression. And China’s Hong Kong and Macao Affairs Office has slammed pro-democracy legislators — a clear interference in breach of the Basic Law.

Beijing now claims that Article 22 of the Basic Law — which bars any department of the mainland regime from meddling in matters that fall under Hong Kong’s autonomous authority — doesn’t apply to the Chinese government bodies charged with governing Hong Kong. If so, then in what sense is the promise of “one country, two systems” still alive?

I have known Martin Lee for nearly 23 years. He epitomizes the common wisdom, gentleness and fundamental reasonableness of Hong Kong people. To arrest hotheads throwing Molotov cocktails is justified. But to arrest a mild-mannered octogenarian lawyer and former legislator and other moderate democrats is an insult. It is Beijing’s most ­vicious blow to Hong Kong yet.

As a Briton, I’m especially pained by Beijing’s grotesque trampling of the Sino-British Joint Declaration. As Lee testified before the British Parliament four years ago, that declaration was supposed to guarantee that “no Hong Kong resident would have to fear a midnight knock on the door.”

Now that knock has come.

The West mustn’t lose sight of what’s happening, even as we deal with the pandemic and its economic aftershocks. The British government, with its legal ­responsibility for Hong Kong, and the United States, with its vast influence, must speak out — and act. One first step might be to sanction officials in Beijing and Hong Kong responsible for this strangling of freedom.

We can’t afford to allow such a vital global financial center to collapse into tyranny. And we can’t allow China to shirk its ­legal commitments with such impunity. A pandemic shouldn’t cause us to forget our values. If anything, growing evidence of Chinese Communist malfeasance in the pandemic’s early stages is a reminder of why we should care about what happens in Hong Kong.

Right now, the Communist ­regime is holding a dagger to Hong Kong’s throat. But don’t be surprised if Beijing next points that dagger at the West. In fact, it already has.