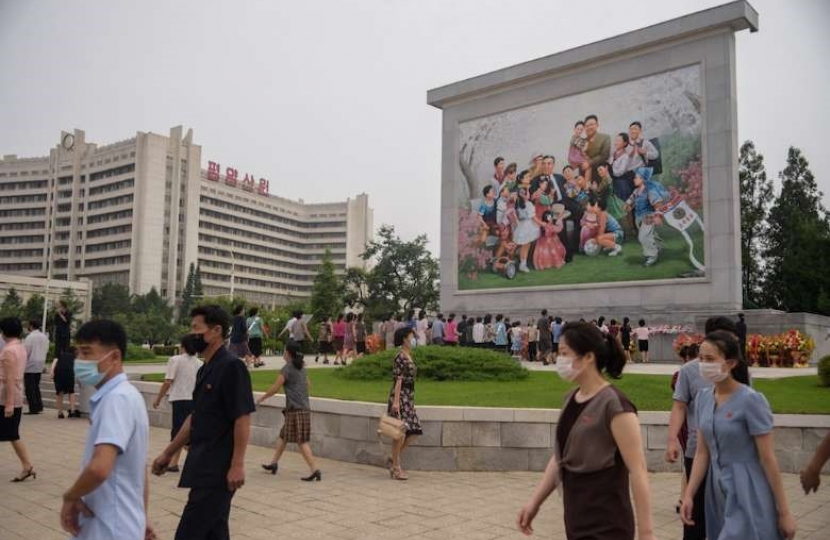 Ben's full article can be read below;

"For years the world has known about the truly appalling atrocities in North Korea. And yet for years, much of the world has chosen to close its eyes and cover its ears and do little.

Fourteen years ago, the human rights organization I work for, CSW, published one of the first and most comprehensive, in-depth accounts of the horrors in North Korea — a report titled “North Korea: A Case to Answer, a Call to Act” — which called for the establishment of a United Nations commission of inquiry to investigate crimes against humanity.

Initially, the response was discouraging. I recall diplomats, policymakers, journalists and other major human rights groups telling me to my face: “You are wasting your time. You are banging your head against a brick wall. The UN will never hold an inquiry into North Korea’s crimes.”

When faced with such disheartening reactions, there are only two possible responses. To give up or to shrug it off and keep going. My colleagues and I took the latter course. We felt that if enough of us banged our heads against the brick wall for long enough, we might just dislodge some bricks, even if we got a headache in the process. And in my mind was what is said to be a Chinese proverb: “The person who says it cannot be done should not interrupt the person doing it.”

So we persisted. A tiny band initially. Then we recruited others. Finally, we formed the International Coalition to Stop Crimes Against Humanity (ICNK), launched in Tokyo in 2011, bringing together over 40 organizations from around the world, including Amnesty International, Human Rights Watch and the International Federation for Human Rights (FIDH), to campaign for a UN inquiry into North Korea. And a movement was born.

Less than two years later, with support from the UN high commissioner for human rights and the UN special rapporteur for human rights in North Korea, the UN Human Rights Council established a commission of inquiry. And seven years ago, that inquiry, brilliantly chaired by Australian judge Michael Kirby, concluded that Kim Jong-un’s regime is committing crimes against humanity, the “gravity, scale and nature” of which “reveal a state that does not have any parallel in the contemporary world.”

The UN’s report documented a catalogue of atrocities including "extermination, murder, enslavement, torture, imprisonment, rape, forced abortions" as well as severe religious persecution, enforced disappearances and starvation. All of this should lead, the inquiry recommended, to a referral to the International Criminal Court.

Yet that was seven years ago. Today we are faced with an unchanged situation. Indeed, there is an imminent emergency as Human Rights Watch reports that over 1,000 North Koreans are detained in China, poised to be forcibly repatriated to North Korea by the Chinese regime in total breach of international humanitarian norms and to a certain incarceration, mistreatment, torture and probable death.

China has already recently returned 50 North Koreans, despite international protests and appeals, and it has a habit of sending North Koreans back to torture and death.

With the world news full of woes, North Korea only receives occasional attention. Sporadic gossip about Kim Kong-un’s health, physique and succession, as well as occasional reports of a new famine, get a look-in from time to time. But last week a new report by a British parliamentary group shattered the silence for the first time in years on North Korea’s crimes against humanity.

The new report, published by the All Party Parliamentary Group (APPG) on North Korea in the British parliament, complements and shakes the dust off the UN’s report and investigates what has happened since 2014.

Its findings are damning. It concludes that there has been no improvement in the human rights situation in the past seven years, that the UN and the international community have failed to implement most of the commission of inquiry’s recommendations, and that there is clear evidence of continued killings, torture, sexual violence, modern-day slavery and religious persecution.

Moreover, according to the APPG report, these atrocities continue to amount to crimes against humanity, and “there are reasons to believe that some of the atrocities reach the threshold of genocide.” A genocide claim is a big one to make and one which the UN inquiry stopped short of making, although it is raised as a question.

The APPG believes the targeting of three groups in particular — Christians, half-Chinese children and the so-called “hostile” class in North Korea — might reach the definition of genocide, the crime of crimes which requires proof of intent to destroy, in whole or in part, a national, ethnic, racial or religious group.

For anyone who has worked on North Korea for any length of time, the testimonies in the report are all too familiar. But that does not make the findings any less raw. According to the International Bar Association’s 2017 report, cited by the APPG, a prisoner described how another inmate “was raped by a security officer, after which the officer stuck a wooden stick inside her vagina and beat her lower body, resulting in her death within a week of the rape.” Another example was cited where a female prisoner was raped and impregnated by a prison officer. “When the woman gave birth, she was taken to the punishment block, and her newborn baby was fed to prison guard dogs.”

Christians are especially targeted. Possession of a Bible results in certain incarceration in a prison camp and the most severe forms of torture, while those who are caught sharing their faith face execution.

The regime has long divided North Korean society into multiple political classes, from “loyal”, “wavering” to “hostile”. Anyone with a religious background, South Korean ancestry or a historic connection with wealth is categorized from birth as disloyal to the regime and therefore in the “hostile” class, consigning them upon birth to a lifetime of discrimination in employment, education, housing, health care, access to food and other opportunities.

Thae Yong-ho, North Korea’s former deputy ambassador in London who defected in 2016 and is now an elected member of the South Korean National Assembly, told the inquiry that under Kim Jong-un, the human rights situation is getting worse. Frequent purges of the elite have created “an unpredictable atmosphere” in the regime.

The APPG’s report provides a range of recommendations, aimed primarily at the United Kingdom but relevant for the international community as whole. It argues that governments must re-engage on human rights in North Korea using all available avenues, work with the new US administration and other allies to push for renewed attention on North Korea’s human rights crisis at the UN Security Council, and revisit the UN inquiry’s recommendation to establish a human rights contact group for North Korea to ensure coordination and dialogue between concerned states.

Mechanisms for accountability for crimes against humanity must be reviewed, including referral to the International Criminal Court or an ad-hoc tribunal. Countries should exercise universal jurisdiction where possible, while action at the International Court of Justice for North Korea’s breaches of the Geneva Convention should be considered.

Projects developing transitional justice, truth and reconciliation should be supported, with targeted sanctions continued and strengthened. Humanitarian assistance should be coordinated to ensure it reaches those who need it in North Korea, and survivors of sex trafficking and sexual violence should receive support in the country where they are found and given protection and assistance, including asylum, where needed.

This new report is a wake-up call: nothing has changed, little has been done and there is much, much more to do.

It is especially important as media speculation grows that Pope Francis may be lining up a historic visit to North Korea. I do not oppose such a visit per se, but I would urge extreme caution, deep thought and intense preparation. And prayer and reflection about what the goals are.

The pope’s dealings with the regime in China should not provide the roadmap for how to prepare for a visit to Pyongyang. That would involve a sell-out, moral compromise and a further undermining of the Holy Father’s moral authority. That’s not the way.

But that doesn’t mean he should not go. If he does go, he must use it as an occasion to shatter the silence, to speak truth to power, to break through the wall of isolation that surrounds Kim Jong-un’s brutal regime. He must absolutely not allow himself to be misused as a propaganda tool for one of the world’s darkest powers. If he is serious about going, he must personally study the UN inquiry’s report and the APPG report, consult the authors of both reports and prepare with care and conviction.

The world is full of problems today. My own in-box alone has Myanmar, Hong Kong, the Uyghurs, Tibet and a multitude of other issues in Asia on a daily basis, and we all have Covid-19 still to contend with. And yet there can be few issues graver than the plight of North Korea’s 25 million people living in a giant prison.

The APPG’s report has blown the dust off the UN inquiry’s report. We must not allow the dust to gather again on either. Let us take both reports as manuals for action and finally act to end impunity for the gravest crimes against humanity in North Korea."