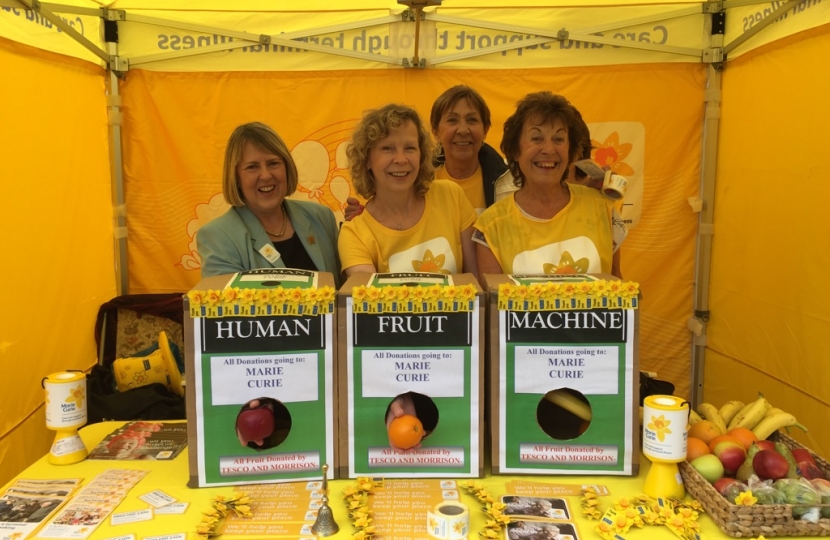 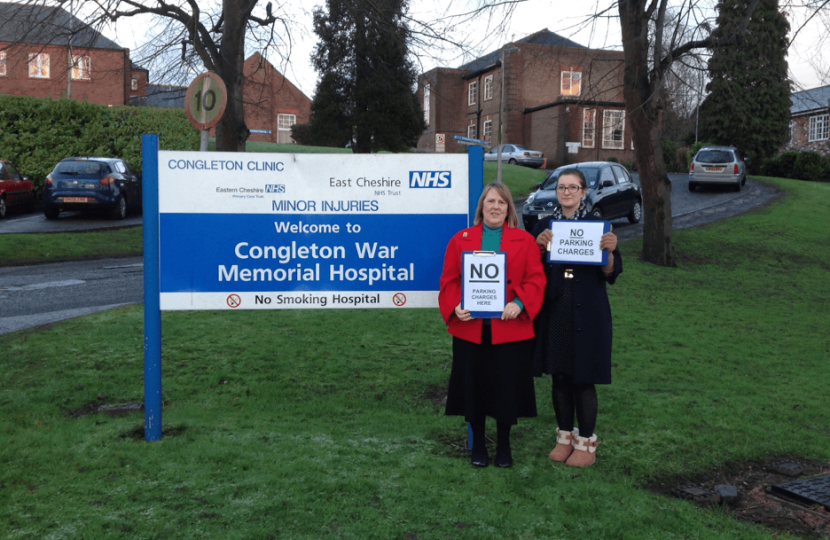 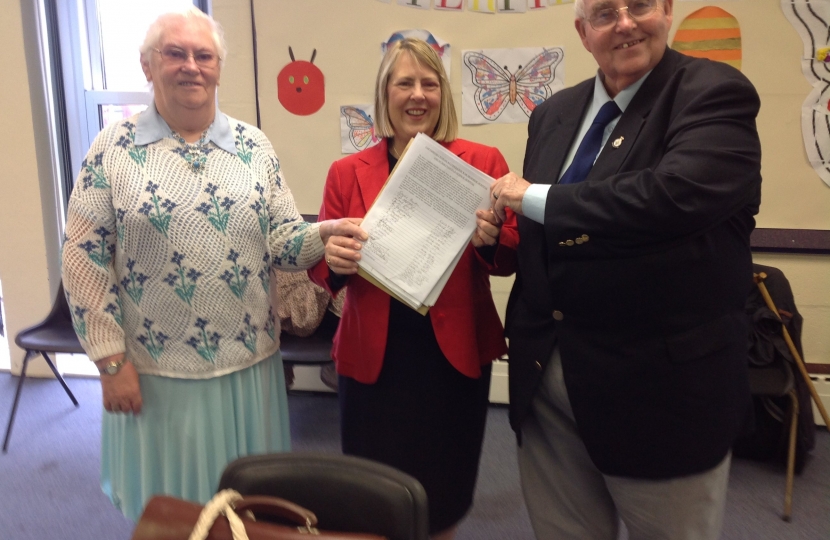 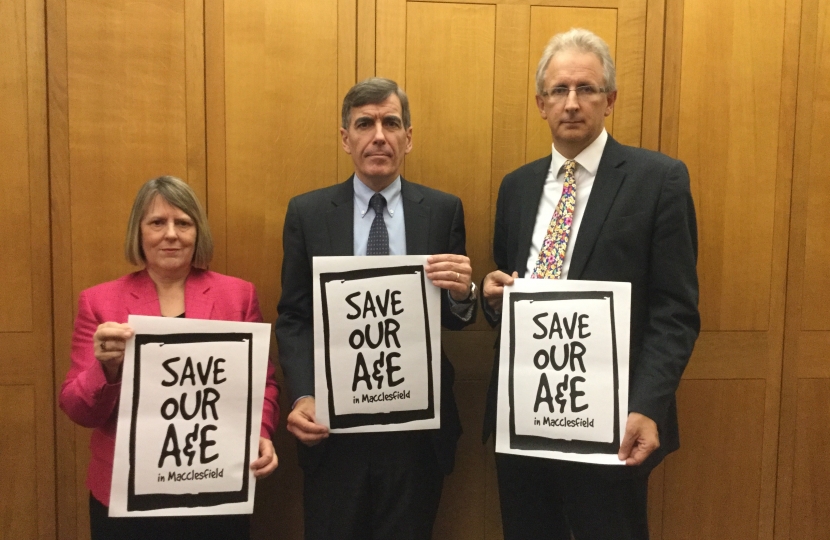 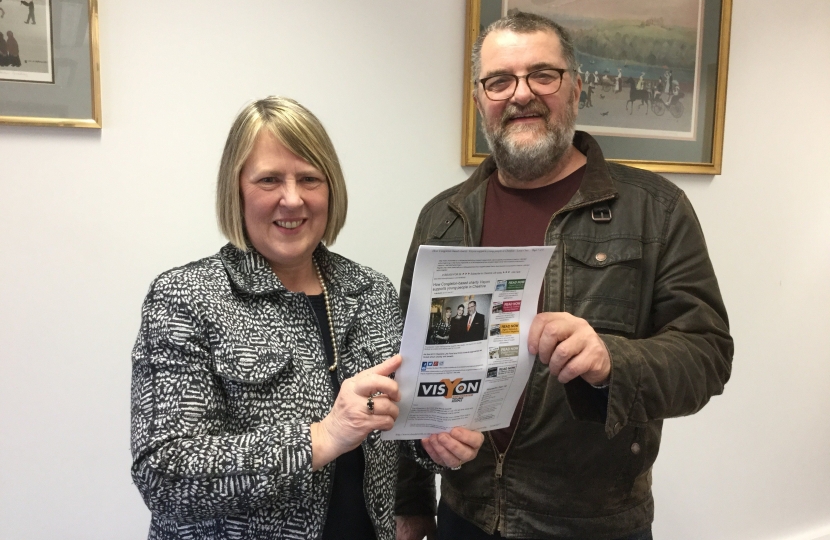 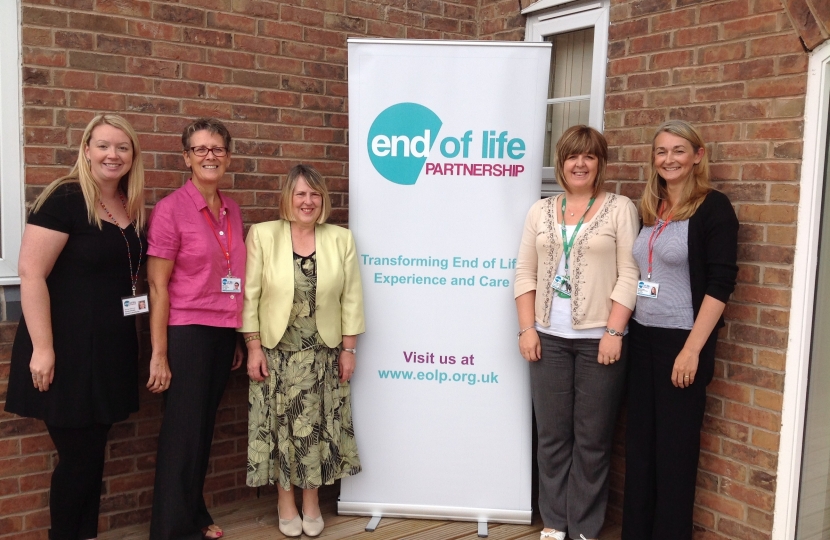 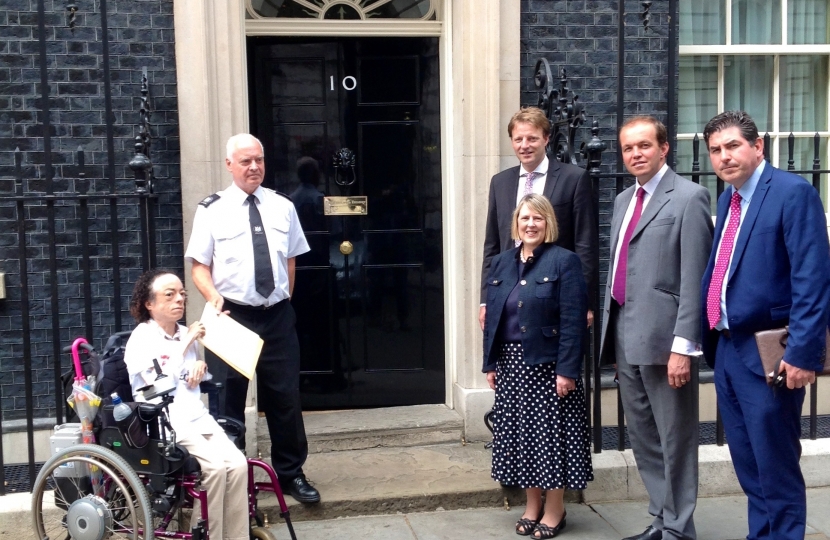 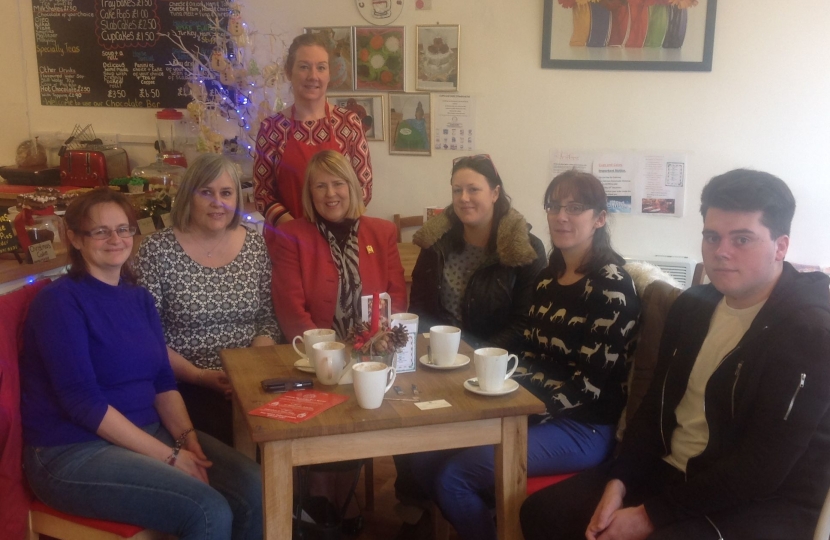 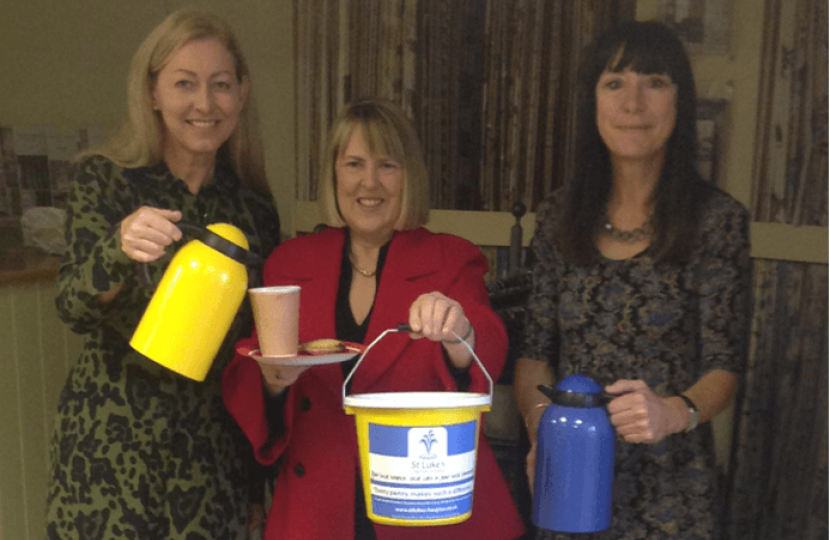 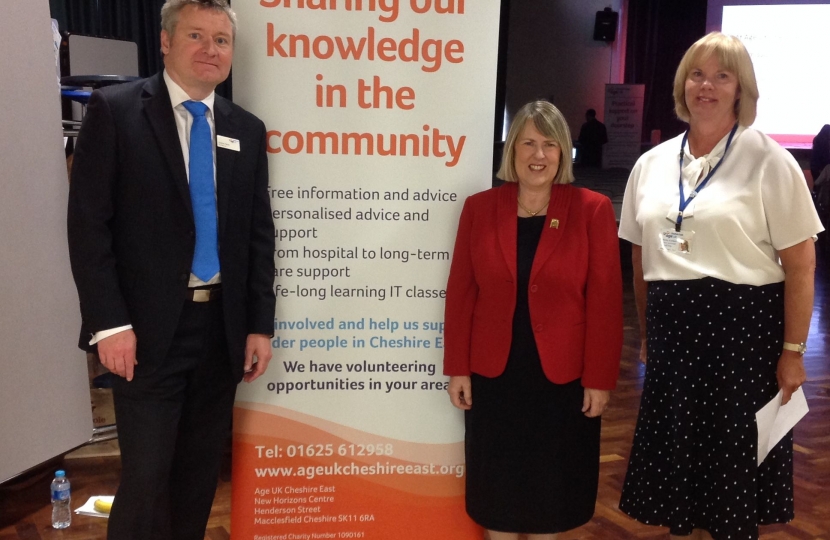 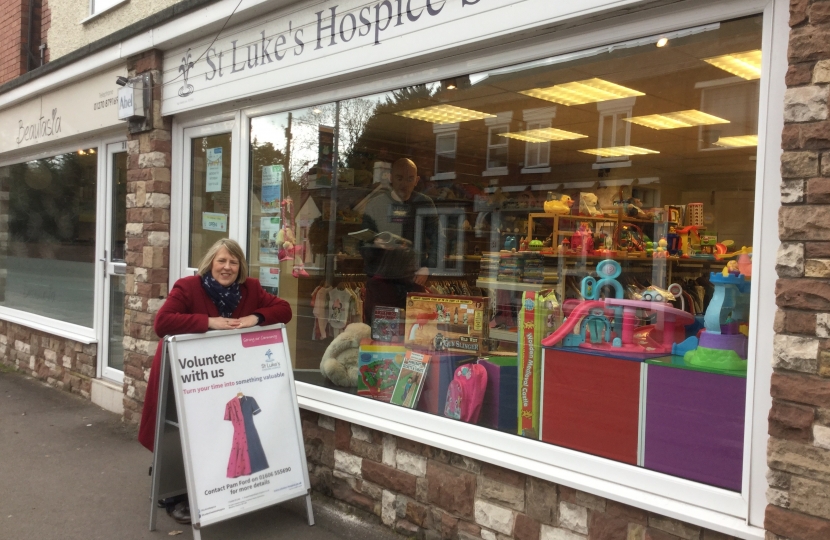 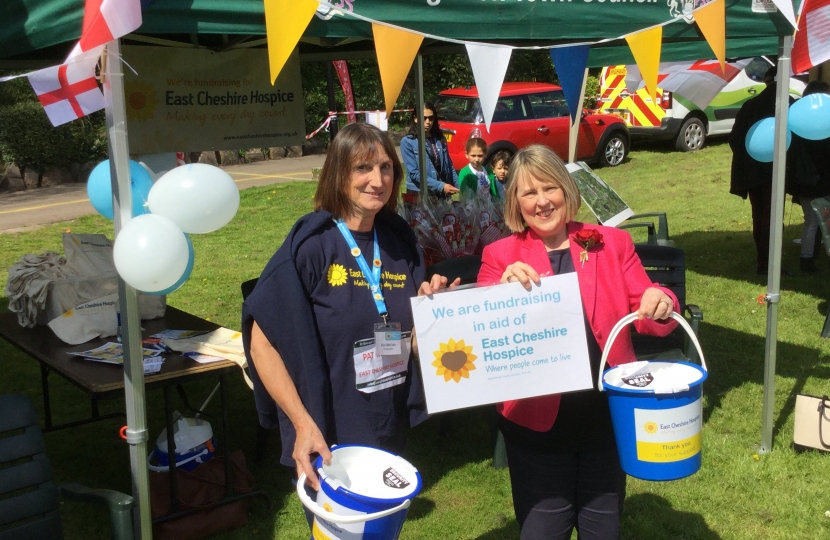 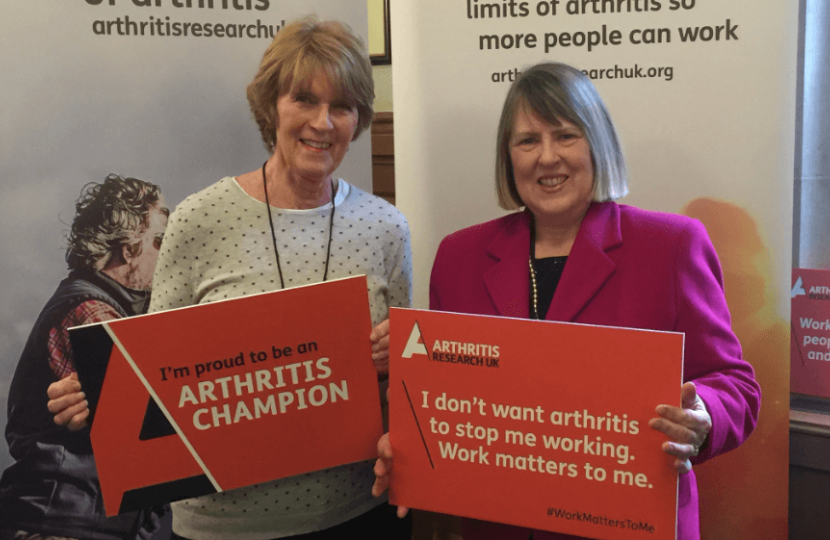 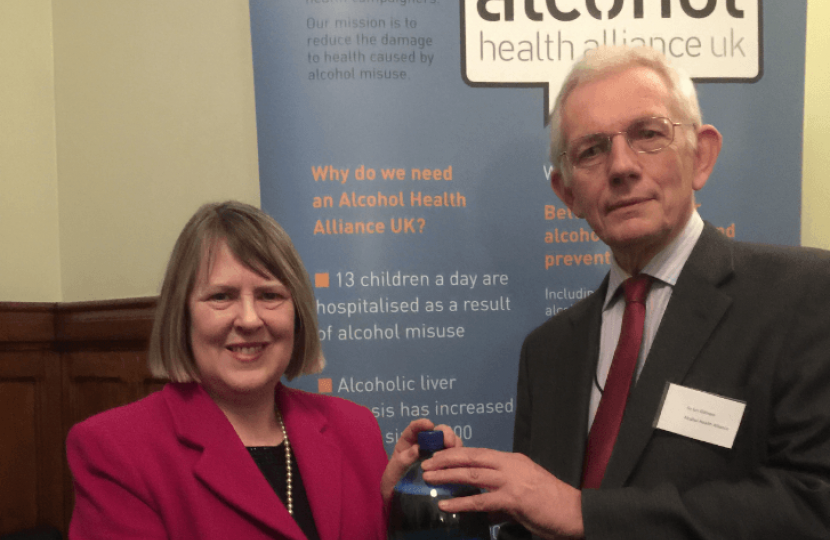 Fiona has strongly campaigned to keep Congleton War Memorial Hospital vibrantly serving the town of Congleton, including successfully challenging attempts to introduce inequitable car-parking charges there, raising this with the Communities Minister.

Together with others, Fiona also successfully campaigned to ensure that local A&E facilities in Macclesfield stay open - confirmed November 2016 - and is determined, if ever required, to fight just as vigorously to retain maternity services at Macclesfield Hospital. Furthermore, it was announced in July 2017 that not only will the A&E stay open but also that the Government has announced that an additional £879,000 has been awarded to support Accident and Emergency care at Macclesfield Hospital.

On mental health provision for the area, Fiona has continually worked in a number of ways to highlight the currently inadequate provision and draw in better resources to support local needs. She is pleased the Government is now treating this issue with the gravity it deserves, and has committed more funding to it nationwide - but there is a clear need to ensure that this impacts locally - as Fiona raised with the Secretary of State for Health. She has supported residents strongly in their campaign to keep the Millbrook Centre open at Macclesfield and was recently very pleased at the news that this is to be the case - for the time being, but she stands ready to provide further support if needed. Fiona has also supported and campaigned for a group of mothers in Middlewich, working to secure better funding for those who experience autism in their young lives.

Fiona has long been a supporter of improved end-of-life care, and of both St Luke's Hospice, of which she has been a Vice-President for many years, and East Cheshire Hospice, of which she was more recently pleased to have been made Vice-President. Fiona promotes high-quality palliative care. In autumn 2015, Fiona took a lead part in successfully opposing an attempt to legalise euthanasia, and in promoting instead improved palliative care.

Of considerable concern for some time on the part of local residents, and a concern which Fiona shares, are the difficulties of obtaining a GP appointment and the challenges which local doctors' practices face in ensuring there are enough doctors to serve local needs. Fiona has raised this more than once, directly with Health Ministers - for example, after meeting practice members at Holmes Chapel Health Centre - and while the situation is far from fully resolved, she pleased is Government has listened to such calls and decided to invest substantially in GP training. Fiona is currently raising concerns on behalf of residents worried about the potential closure of Rode Heath Surgery.

Fiona was one of the strongest campaigners for improved provision for arthritis sufferers, working in partnership with Arthritis UK; she has ensured they met Health Minister David Mowat recently, and a speech on by Fiona on this issue, can be found here. Fiona is delighted that she has a strong local champion for arthritis sufferers' support in her local constituency - Christine Walker - and pays tribute to her.

Fiona has worked extensively on the issue of Alcohol Harm and has campaigned for many years to promote responsible, enjoyable alcohol consumption. She has spoken a number of times about this, and recently led a major debate on tackling alcohol harm, following which Health Minister Nicola Blackwood - who was visibly moved in the debate on hearing the impact that excessive alcohol consumption has on families - has agreed to take steps to address this. Fiona, recently produced a powerful report, The Frontline Battle, the impact of excessive alcohol consumption on doctors, nurses, ambulance drivers, police and others who work in the emergency services. A specific campaign which Fiona has been running, together with David Burrowes, is to press Treasury Ministers to increase the tax on high-strength white cider - one bottle of which, costing under £4, can contain as much alcohol as 72 shots of vodka. This drink can be lethal, and tragically, to many young people who drink it, it is. Evidence shows that increasing the affordability would save lives.

Fiona called and spoke in a debate on Community Hospitals in the House of Commons, paying tribute to the role Congleton War Memorial Hospital plays in the local community and its fantastic service and asked the Minister whether Community Hospitals will benefit from the over £20 bn increase in NHS

Fiona is backing a campaign to ensure that the Accident and Emergency Unit at Leighton Hospital secures more funding after the Hospital lost out on receiving a share of extra funding made available for winter.

When she attended the recent demonstration outside Congleton War Memorial to save the Hospital’s Minor Injuries Unit Fiona undertook to take local people’s concerns down to Westminster.

Fiona took part in a demonstration at the Congleton War Memorial Hospital, opposing reductions in service.

Fiona met with older people from across the country at an event in Parliament organised by the charity Age UK.

Fiona hosted a Dementia Friends session at her offices in Congleton recently.

Fiona is taking a leading role in a campaign to help protect young people’s health in their constituency. She has signed up to promote meningitis awareness and vaccination take-up with GPs following a Parliamentary reception organised by charity Meningitis Now.

Fiona met with Jo’s Cervical Cancer Trust in Parliament to highlight their call to make cervical cancer a disease of the past.